Two good friends and I have committed to riding up Arthurs Seat (Mornington Peninsula) multiple times on Monday 8th June. We will ascend over 8,848 metres which is the equivalent of Mt Everest. 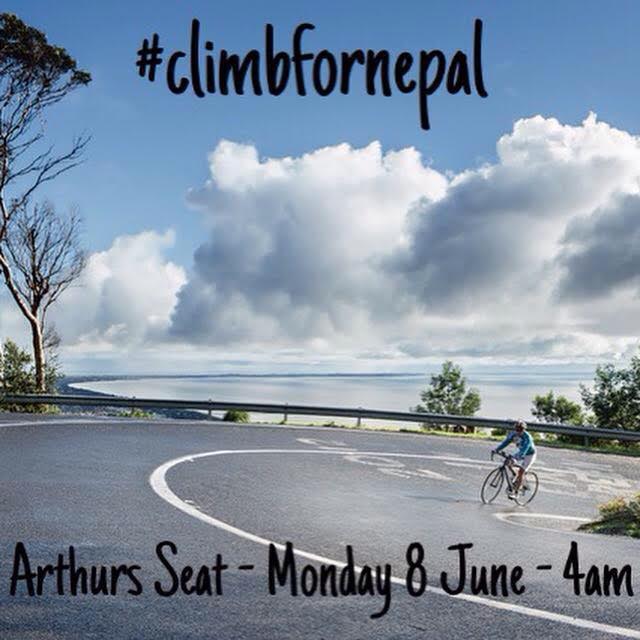 We are doing it to raise coins for a local riding buddy of ours Dr Mark Sujecki who is a member of TrekMedic (see the link below) a not for profit team of volunteer doctors, nurses and allied health professionals who provide basic health care, education and emergency aid to under-privileged communities worldwide.

Dr Sujecki is leading a volunteer group of medico's to Nepal at the end of June for three weeks. The TrekMedic group will visit remote villages to provide much needed medical care, and your donations will be used to purchase and deliver supplies of food and medicines.

Any donations are guaranteed to be used directly on behalf of the communities in need. https://www.facebook.com/pages/TrekMedic/148696285249209

We are planning to start our “#everesting” of Arthurs Seat from the gate at the base of the 8.3% climb at 4am on Monday 8th June and will give ourselves 16 hours to complete around 36 climbs.

We are asking all our friends (lycra wearers or not) to give up their $3 or $4 coffee money for that day and drop it in one of our tins on the hill, or drop cash donations directly into the Medical clinics at Mt Martha Village or on Dunns Rd in Mornington.

We are not asking for lots of money, just $3 or $4 dollars to help us finish this challenge, please feel free to come down on the day and cheer us on, there will hopefully be lots happening. 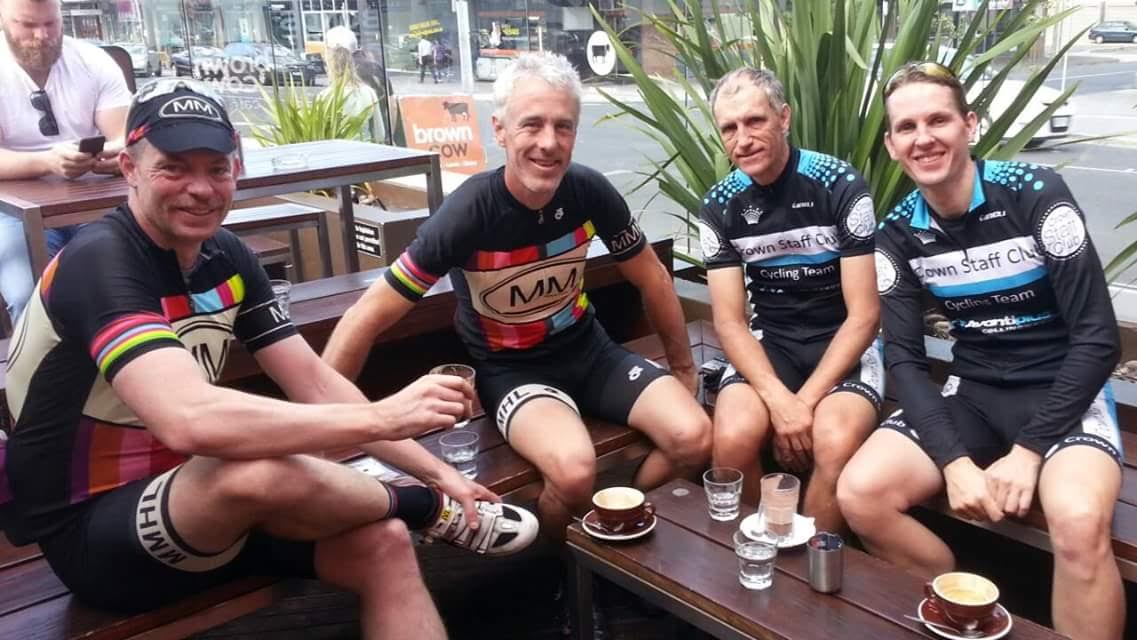 They started in a cold and windy typical Melbourne Winters day at 3.09am, no rain, roads dry, but bitterly cold. 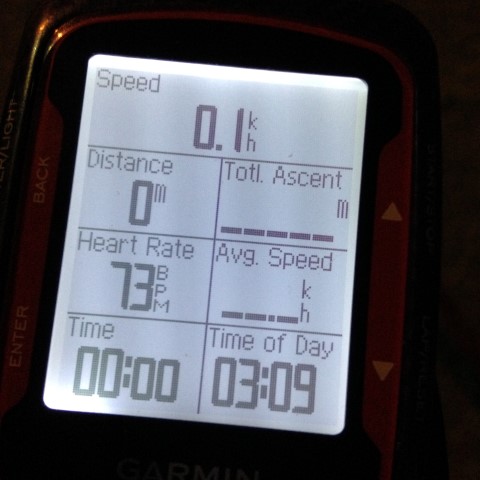 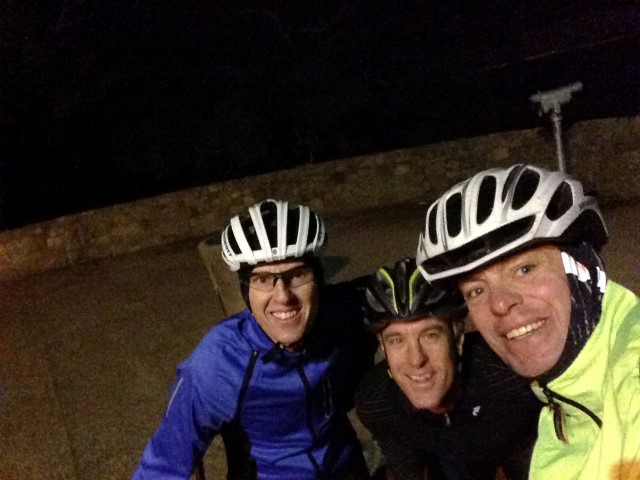 But nothing could dampen their spirits... And off they went.

When the next update came through, it was a shock to see how far they had done... 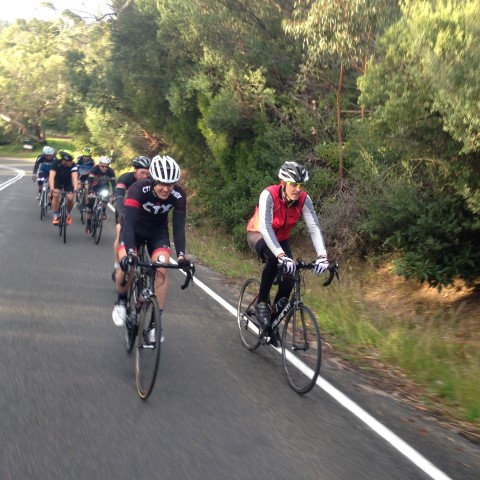 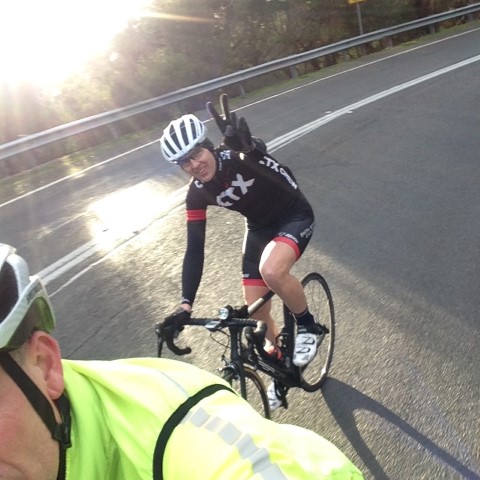 Next update 12:30pm:
5,000 metres deep, great community support. We only rolled the first lap alone. Coffee, bacon and eggs have been running out the door since 4am for a gold donation. 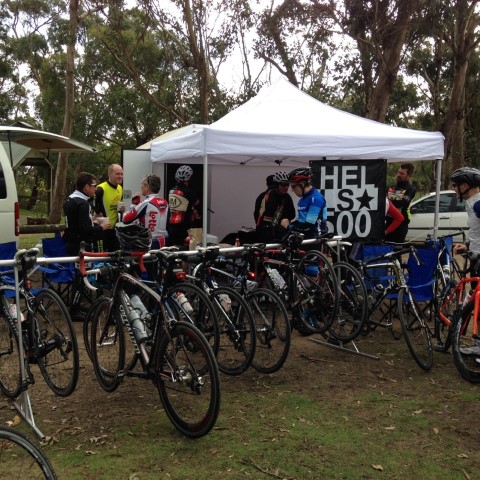 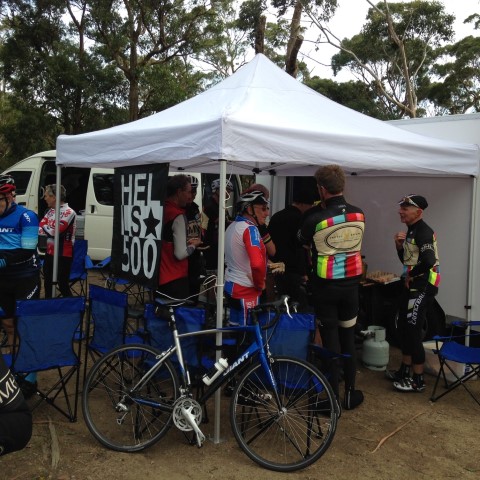 Last update of the day came late with a text message at 9.30pm. It simply said 'Done, tired, going home'

The lads had completed 34 laps of Arthurs Seat, they raised in cash over $1800, and more money online. It was time to call it a night. 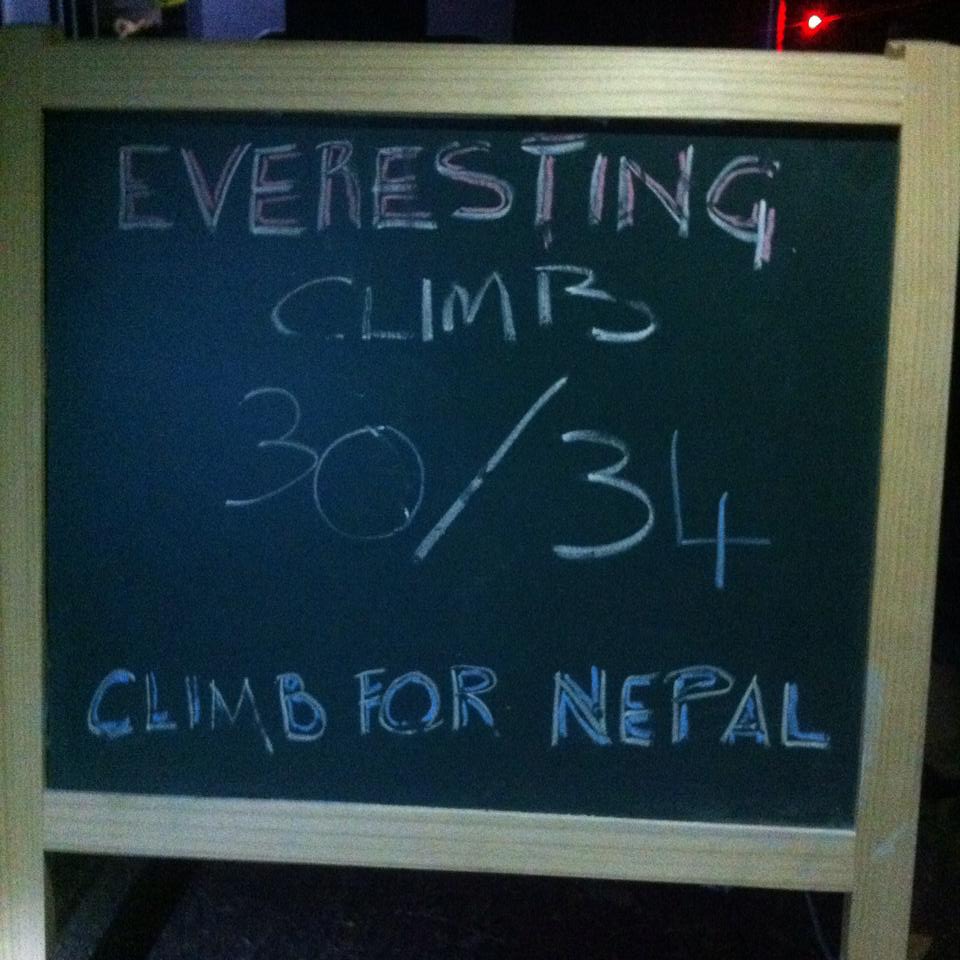 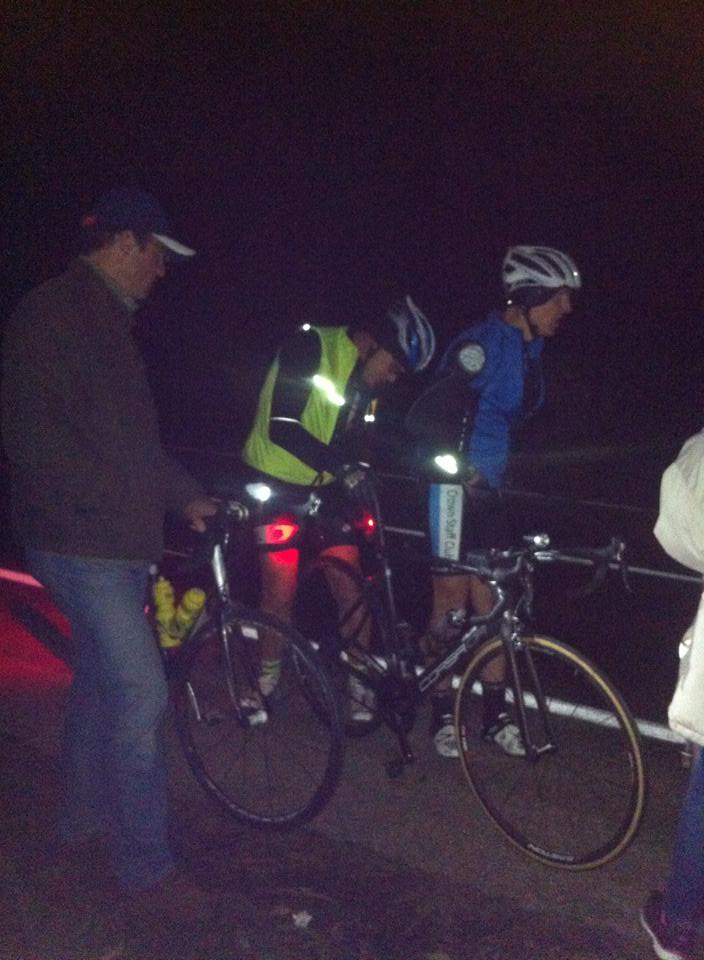 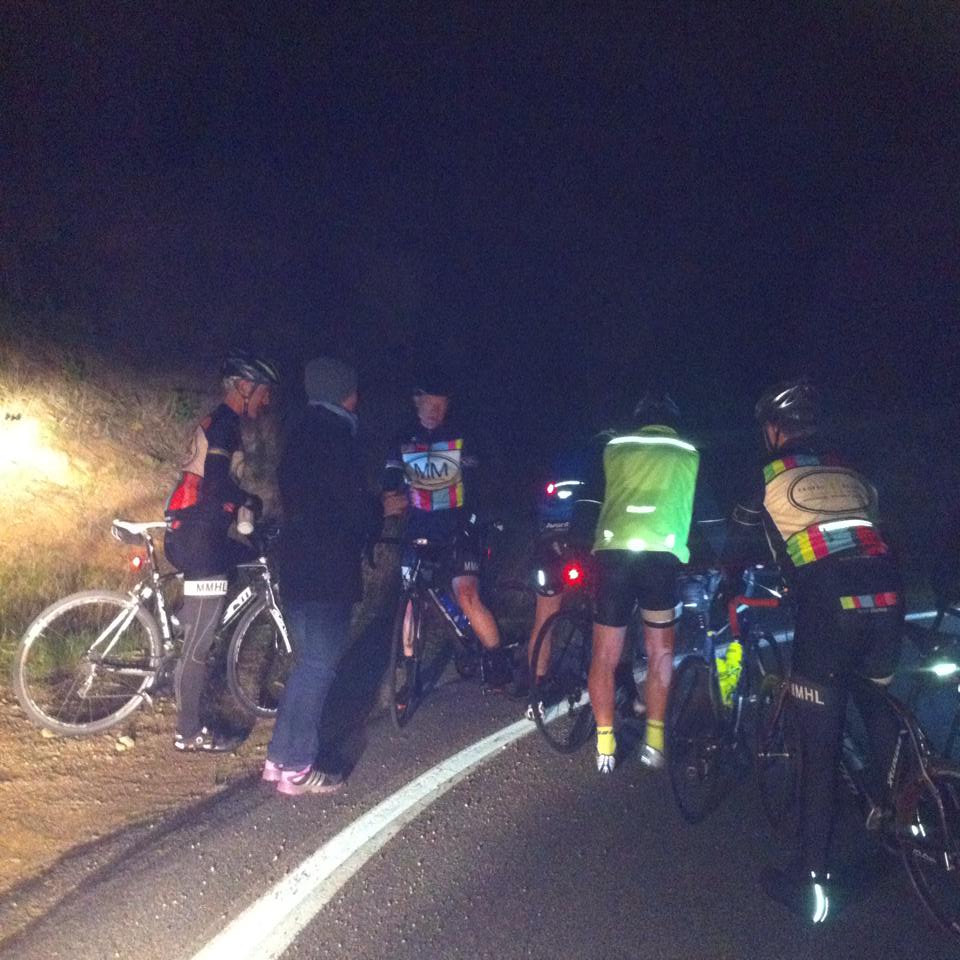 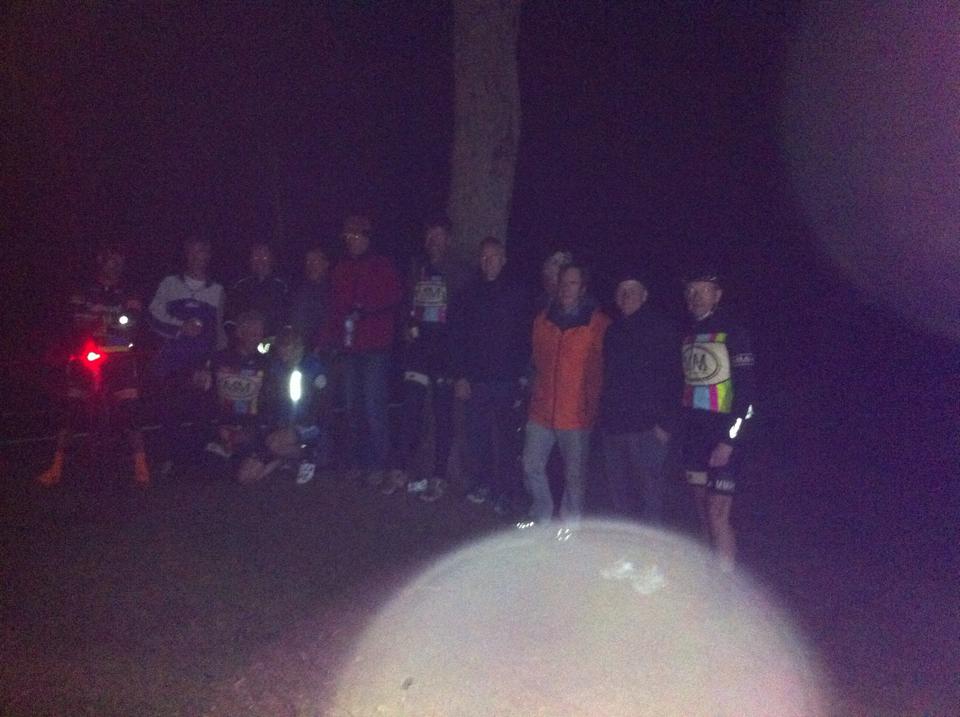 A couple of video clips to celebrate the acheivement. 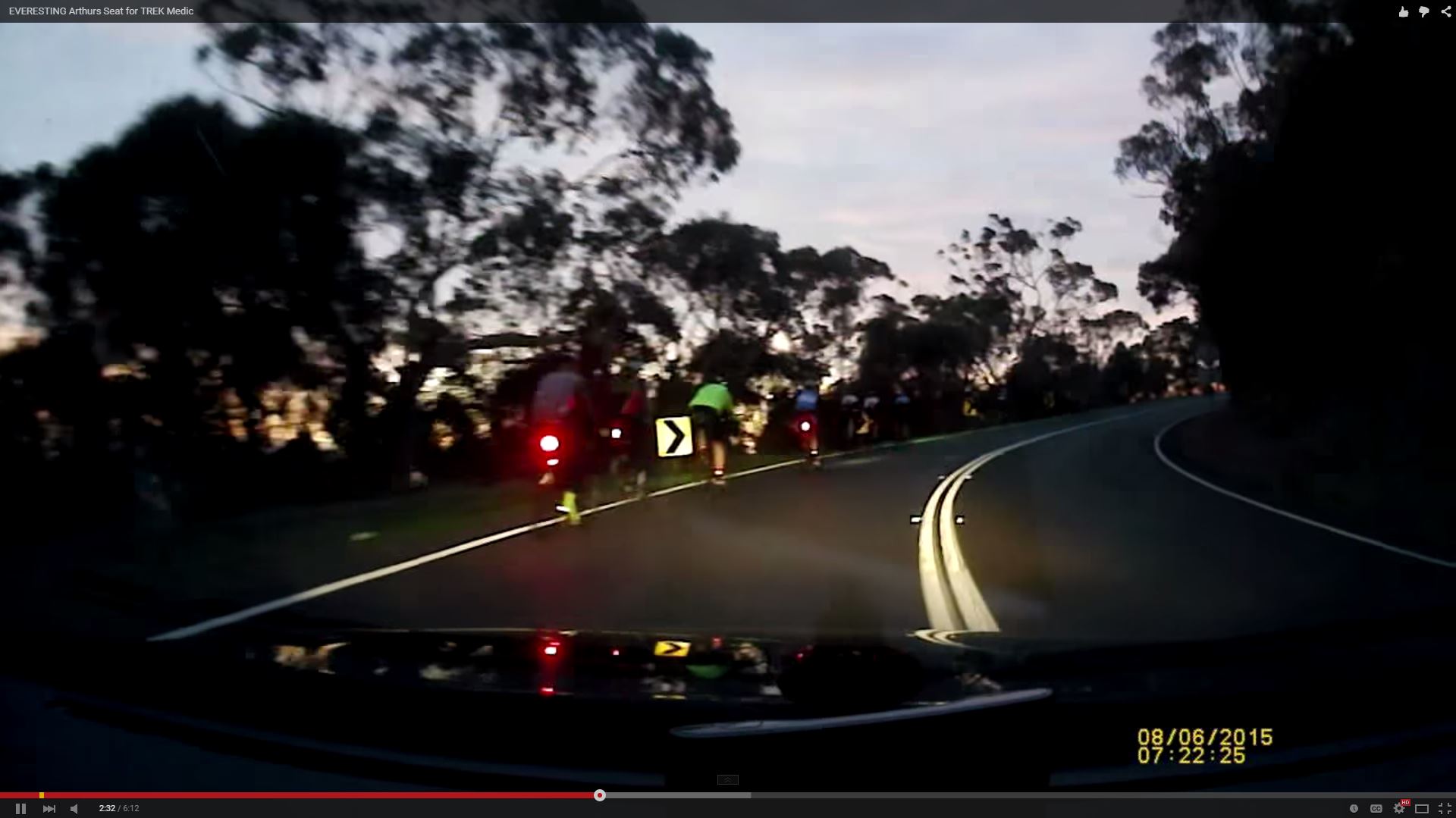 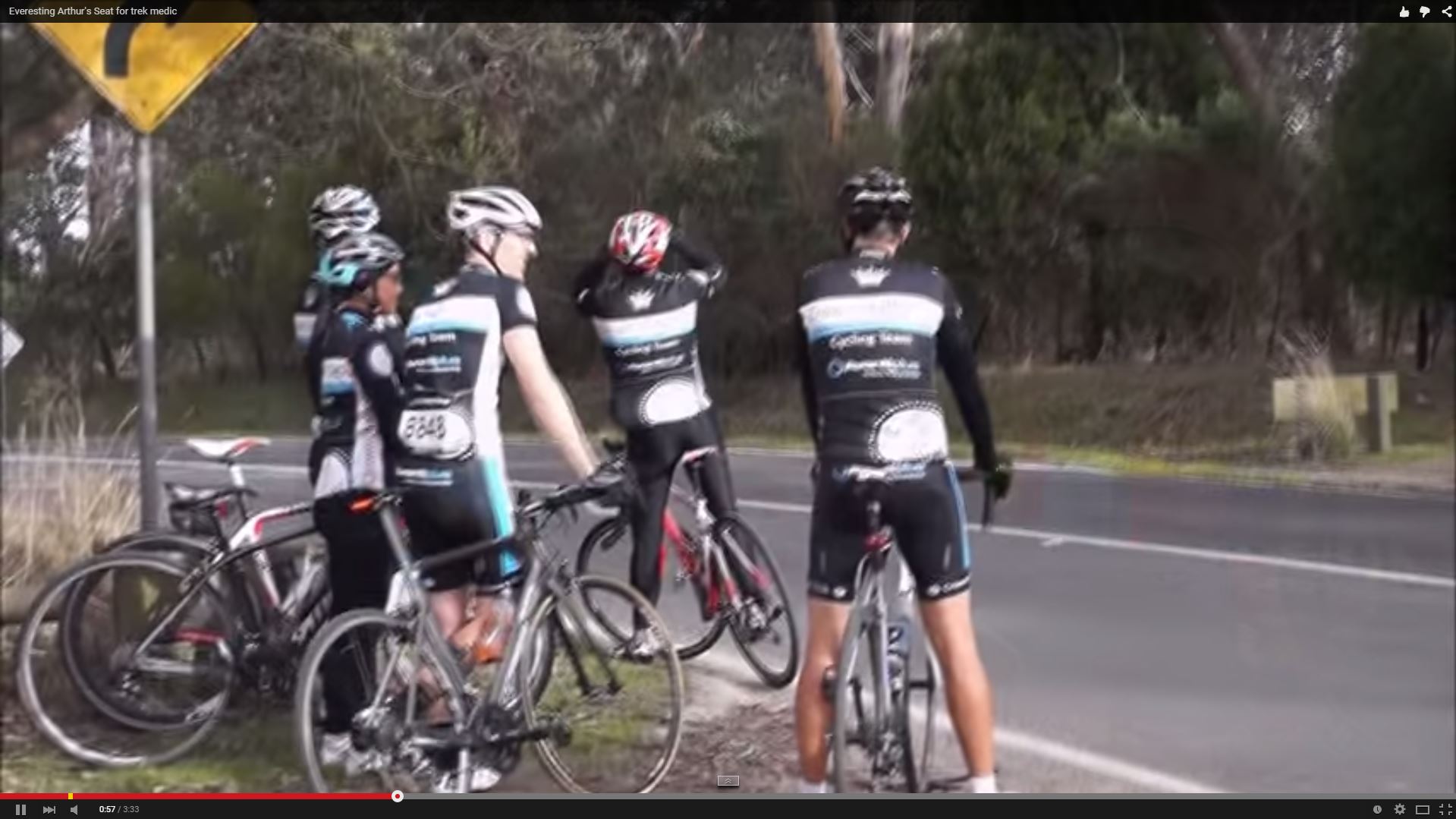 There is nothing like this event in the World that is more unique yet more the same. it is a climb of 8848 vertical metres. One way or another you climb the height of Mt Everest. So how did the gentlemen feel afterwards. 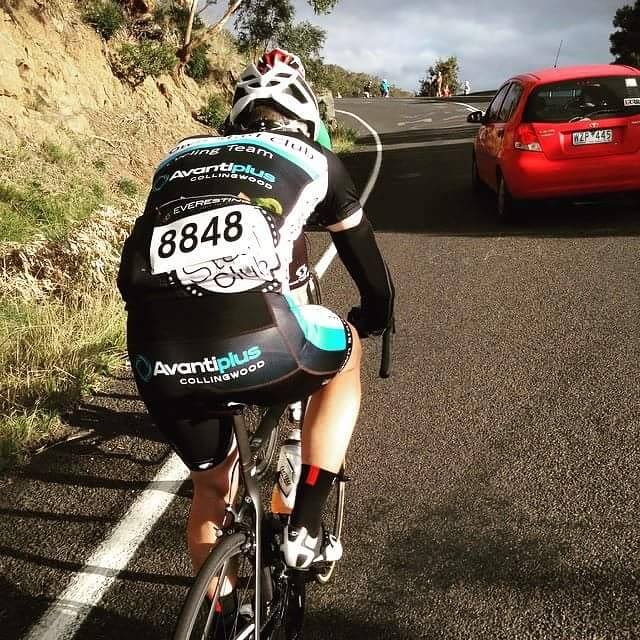 Well what made us do this? Talk of doing something crazy had been going on for many months between the three of us over post ride coffees but we never realised it would have ever amounted to something this big, crazy repeat training in the lead up to 3peaks in March had people saying wow what’s next? You would have thought it had taken months of planning instead of two weeks, the tragedy in Nepal meant that one of our riding mates would be going to help with the Trek Medic relief effort, Strava and Hells500 announced that cyclists would be able to help raise awareness in June and then after a brief phone conversation it was Greg who announced he was everesting Arthurs in 2 weeks to raise funds for Nepal. It took me three minutes and a quick approval from my ever supportive wife to confirm with Greg that it wasn't a solo effort, our riding communities were shocked at the announcement but not shocked that we were attempting it, it only took Matt a few hours more to jump on and the word started to spread. As the day came closer with the help of some key cycling ambassadors pledges and offers of support came flooding in. Arthur’s Seat is such an iconic place, whether your riding, driving , running or walking it you don't really want to do it more than once. The day was such an incredibly magic moment for the three of us, it was only the first descent at 3:15am that we rode without anyone else, for the remaining 18 hours our cycling friends came from everywhere, our families and friends were there to support us at the top of each climb, friends were made, connections were formed, cyclists from all different clubs came together for the one cause, people were inspired and motivated to do more than they had before, some for the first time, for me I just new I had to get to 9000m, at 8000 my body started to shut down, I wasn't able to get fluids in so the repeats became slower, with only one climb to go I got to the top 4m short so had to go to the bottom again, the feeling of seeing the 9k on the garmin was amazing, we’d done it, I would have loved to stay for longer at the finish but my body needed some fluids, thankyou to the lovely
staff at Rosebud Hospital who were as shocked at the efforts as my body was.

Looking back I’m still in shock but for many reasons, yes we did it and that was a surprise in itself, but mostly as we got to see how amazing people can be. Cycling is such an incredibly social sport which has the ability to bring people together, saying thankyou to everyone who helped now just doesn't seem enough!

Finally a quote from the day: At the end it won’t be mowing the lawns or working that you remember but you will always remember the day you Everested Arthur’s Seat 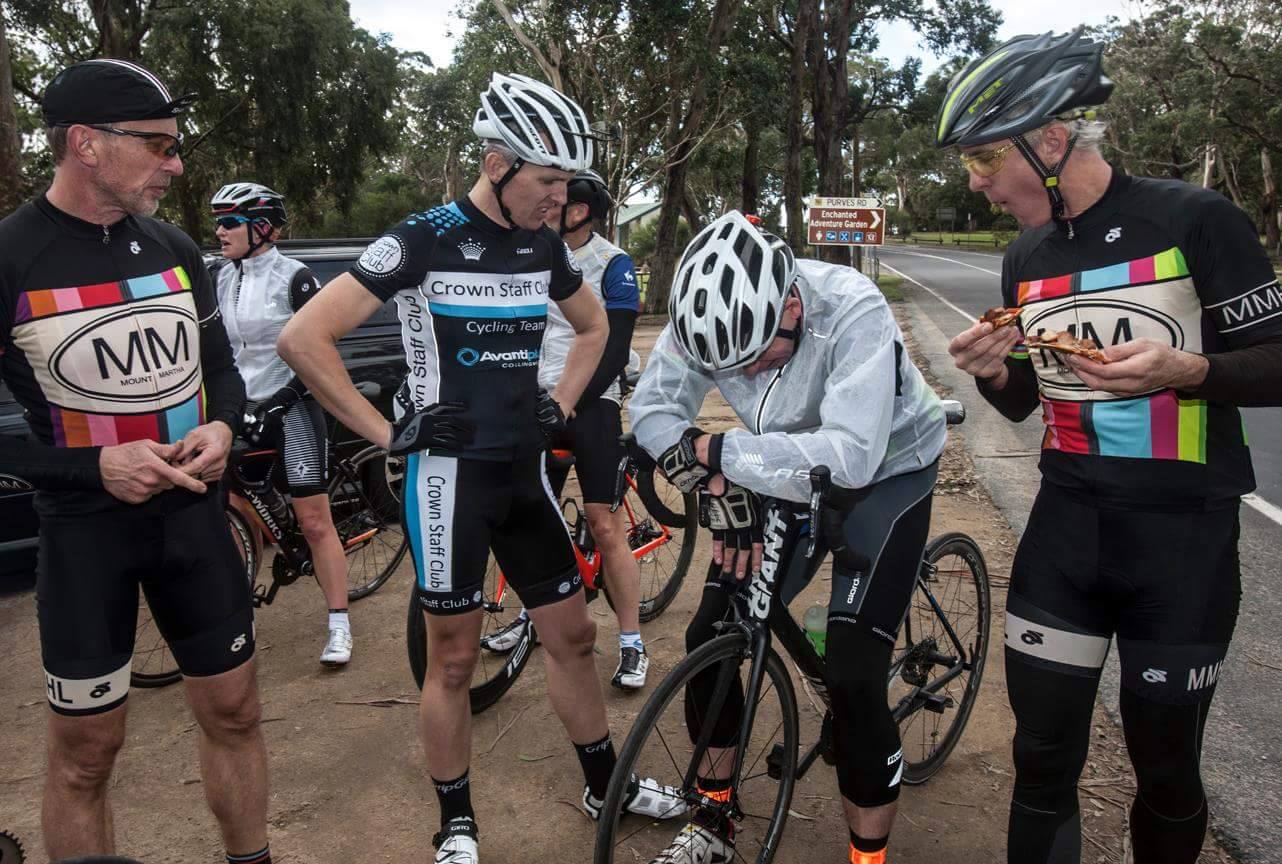 When a mate puts it out there, what do you? Whatever you can, so three of us committed to rally local support for Mark and TrekMedic.

Half way in I knew something was off but by the time I realised it was too late. Nutrition, I got it wrong and suffered badly. I don’t recall many details of my last three climbs other than the hurt!

I pulled out after 21 repeats, having ridden myself into the ground ... bitterly disappointed that I couldn’t physically continue.

Both Greg and Jason finished as we had started in the dark still surrounded by family and friends.

(Editors note: Matthew - you did 21 laps, most people didnt leave their couch. you are still a bloody legend, I choose this pic to show you as a human who suffered for a cause, well done my friend - it was worth it and you got back to see it through) 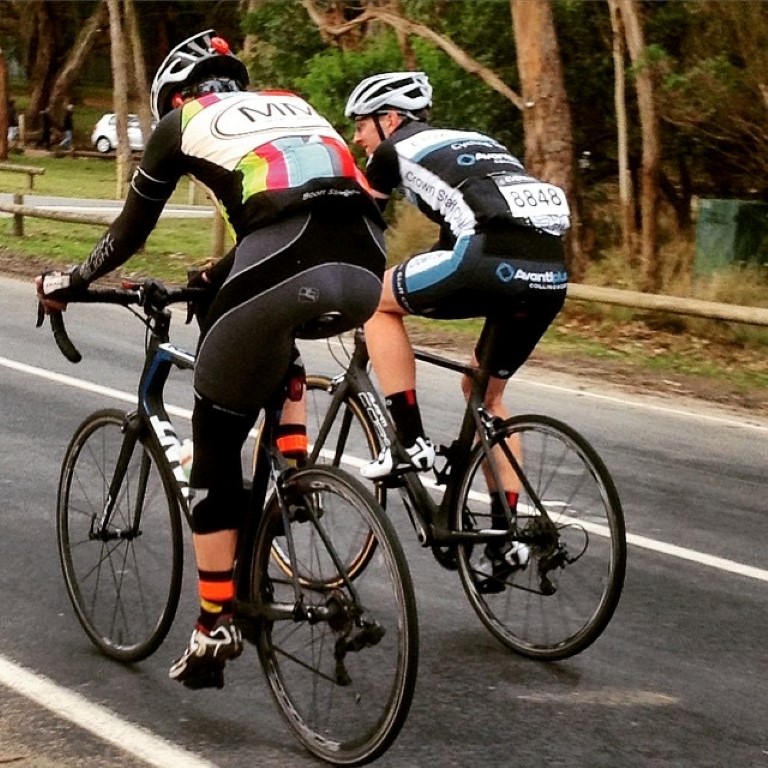 Yes we'd been discussing Everesting on and off for months but the prospect of hill repeats without having an underlying purpose hadn't really grabbed me. I typically like riding my bike to get somewhere, and perhaps to be social at times.

When one of our riding buddies posted on Facebook seeking to raise funds for a humanitarian trip to the earthquake shattered regions of Nepal, the motivation to do something silly, like riding Arthurs Seat to the height of Mt Everest, was realised.

Dr Mark Sujecki is a Mt Martha GP leading a team of medicos to Nepal on behalf of the Not For Profit Organisation, Trek Medic. I rode with him on Sunday 31/5 and popped the question in response to his fundraising post, and he approved. From there, as my buddies have stated, it took them brief moments to jump on board. In short, I gorged myself upon carbs and hydration for the next 8 days, between stints at the computer drumming up awareness and support. Most delightfully surprising has been the incredibly generous response of friends and families prepared to give up large chunks of their time and energy to support us to realise our goal.

The event just unfolded without a central organising committee and culminated atop Arthurs on Monday with hundreds of participants of all ages and backgrounds, and a wonderful sense of sharing and community. I feel sincerely blessed to have been supported by the many strangers and friends, many travelling from distance to contribute. Most of all I'm grateful to my riding buddies Jason and Matt for sharing the vision and pouring in their energy to make it happen, and to Dr Sujecki for the inspiration. As for the ride itself - for much of the day my attention was positively diverted by the social aspects. I remember the sparkling lights of the Peninsula before dawn and as the night descended.

I remember feeling generally fatigued between approx lap 15 and 25, but never too sore, and never in doubt that I would make it. Losing Matty on lap 21 was a big blow but then to see him return in support was rejuvinating. I began to feel stronger the closer we got to reaching our goal and lap 30 was actually my quickest for the whole day!

Seeing Jase struggle was worrying and I couldn't imagine being the only one left standing. Both he and Matt showed such strength of character and determination. The amazing and continued support and encouragement of all those friends and family enabled me to power on and I was literally jumping out of my skin at the finish. I've been surfing on cloud 9 ever since. The estimate keeps rising but I reckon we're gonna raise more than $3000 for TrekMedic!!! Not bad in 8 days :-)