I started in Palmerston with a destination in Deakin. Leaving a quiet street in Palmerston I followed Kosciuszko Ave, into Grampians st, turning right at the roundabout to turn down Nudurr Dr. I had a ute with a couple of young fellas rev it up a little as they came around the outside of me. I thought I might be about to get my first bit of city abuse, but the driver just looked at me and kept going on his way.

As I approached Gundaroo Dr I jumped onto the cycle path, that lasted all of 20 seconds. I changed sides and followed that cycle path to the Barton hwy. I thought do I follow the path and hope to find my way through Belconnen, or take the Barton and ride the road. I took the road option. Approaching the GDE I got a lucky break, the was no traffic behind me and a green arrow to turn right down the GDE. the GDE was uneventful other than having to cross the merging lanes, which was okay except on the fast down hill sections on the run down to the Glenloch interchange. I got a wave from a fellow cyclist at the interchange, he was on the other side of the road, 6 lanes and a traffic island away. I turned off the Tuggeranong parkway at Lady Denman Dr, and found another bike path.

Taking the path towards the zoo, and then onto the Scrivener Dam wall. I followed the bike path for a while. I passed several bike ridders along the paths, I gave a wave off the right hood, but I got not one wave or hello back. I found this disappointing. Even while I was pulled up to take the picture, I was rummaging through my saddle bag and 7 or 8 bikes passed me, and not an offer of "Are you ok?" 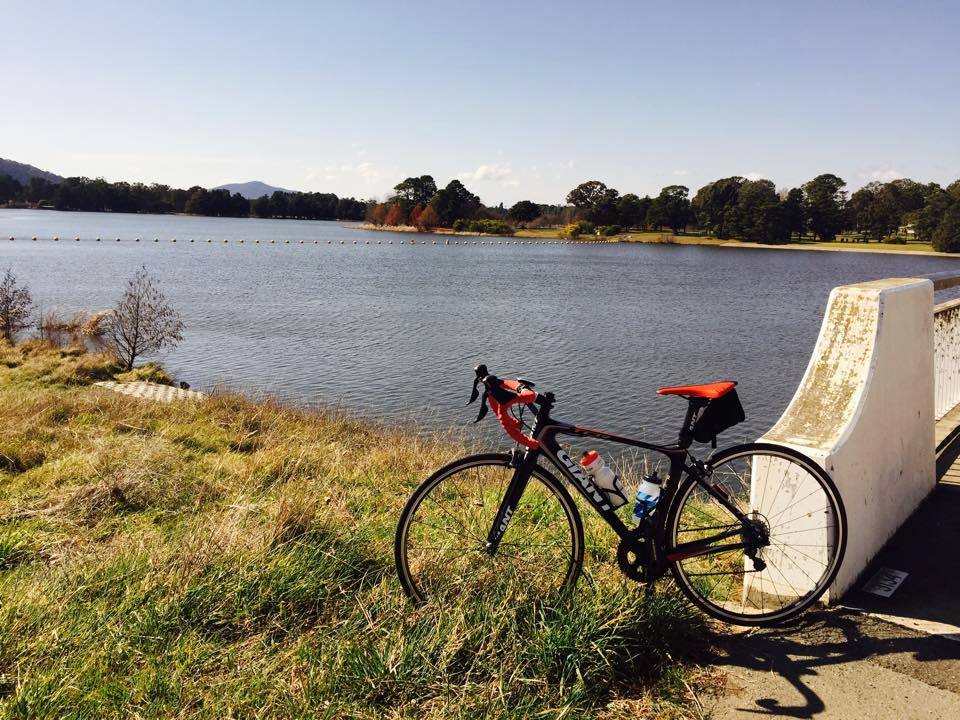 I got to an intersection, City to the left, Woden to the right. I took the Woden turn and followed that until the 'Old cotter road path' There I turned left and found myself back on a roadside cycle lane. I was marvelling at just how wide and smooth the cycle lanes had been. This one was as wide as a whole lane in my home town, that's on 100km/h roads, and I had this as my whole bike lane! As I was thinking that a bloody magpie swooped me, yay. I turned left into Dudley street, onto the only narrow bit of road I had ridden. I turned right at the Kent street path and bunny hoped a few gutters to my destination.

Overall it was a great ride, I only wish I could have spent more time ridding the cycle paths. I really enjoy the cycle paths, even the roads I rode on were awesome, there was a little debris, nothing that hurt my Gatorskins though. I sometimes think you guys in the Cities don't realise just how lucky you are having endless cycle paths. I am sooooo looking forward to when I move to a city, in hopefully 4 or so years time. Great paths, good smooth roads with cycle lanes, sure beats the rough as guts narrow country roads I have.