Because I have had more time of late than the average punter to read, I find myself increasingly reading about safety on the roads. Bear with me folks, we are about to go for a bit of a ride.

I have read a lot of information from both sides of the road (for want of a friendly term). Now when I say information, I mean lots of words, some informative and some that I think is from a person who is in need of professional help. I have read about death, injury, rego, licence, sharing, enjoyment 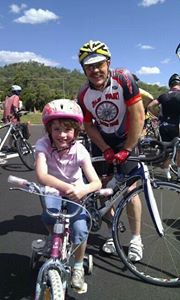 These comments have all been made by people. Strangely enough not one car, not one bike or truck, bus or motorcycle, road, cycle lane or path has commented or written an article. I have therefore come to the conclusion that the solution lies with the people also. I am a glass half full kind of guy so I am going to give blame the flick as I, as a person, are part of the solution.

Now when you read lots, one tends to want to discuss what you have read to share ideas, understand more, and get face to face opinions from real people rather than an alias and to fill time between sips of coffee. During one of these conversations it was discussed how within approximately an hour a video had been posted, gone "viral" enough to have been seen, commented on and debated, passed to the authorities, identified the "perp", released his details, found where he worked, workplace made aware and then said video and all comments removed from all 3 Facebook pages where it had been posted.

As part of the discussion on the pace that this had all occurred was that the young chap had probably learnt a lot of lessons that day including that his actions in said video was indeed a dangerous thing to do. Also discussed was how the employer got dragged into it all and if he still had his job. It was tendered that he still had his job but could not be confirmed but hoped he still was in said job. This was because he would just hate cyclists more if he lost his job, but would learn more about being a responsible citizen from good people around him at work and would learn to respect cyclists after the whole ordeal. Especially as a cyclist had called his boss to apologise for the business being dragged into all this and hoped that he kept his job so he could learn from all of the mistakes he had made in this one event. And he had made a whole heap of mistakes.

One of the members of the discussion, a smart and outstanding chap (not me, but others who know him will agree), commented that he could not believe how quick this had all happened via this thing called social media. I then offered up that it was a bit like when Richard Wilkins broke the news that Jeff Goldblum has died because of a report on the internet that he had died. It too went viral and news agencies around the world were preparing and some delivering reports of dearly departed Jeff. That was until Jeff piped up and said I am still here folks. To this day, Jeff still laughs about it and on numerous comments one articles, were some joker wants a laugh, they post either Jeff Goldblum or Richard Wilkins has died.

This got me thinking. This internet thing and social media is a great thing for making people think something is true in a very fast way and across the whole planet. If used for good rather than evil, a massive paradigm shift in peoples thinking could possibly be achieved in a very short time. Whilst it took 100 years after Columbus had said the world was flat for this to be accepted, Richard Wilkins had killed off poor Jeff across the world in under an hour.

I mentioned way back on this ride, just as we clicked in and pedalled off that it was the people that needed to change. If you can change one person’s attitude towards cyclists and they wrote on the internet that they had changed their attitude it could spread if they got others that they know to say they now like cyclists and why. Because of recent events in my life, I reckon I have got an easy 5 who can say they have a new found appreciation of cyclists and why. If I can get those five to change one person each and so on and so forth, I wonder if a huge amount of people can learn to love cyclists. I like to call it the Richard Wikins effect. Secretly you can call it giving them the Di% $.

I am now off to my Facebook page to ask my friends to say why they changed their attitude to cyclists and why they no longer see them as a bad thing, but a road user to share the road with and how they want others to embrace cycling as a part of society on the road and when they do to put that on Facebook and for others to do the same. You see, if a cyclist says you should love a cyclist, you appear like the desperate pimply guy on a speed dating night. But if a car driver or 4x4 person says, I don't have an issue with a cyclist, it is a bit like, how you become a lot better looking with fame and money (hey mister popular).

Go forth, change one attitude and get them to post it and see if we can change the world. Give them the D_ _ _.

Disclaimer. This may not work but we have to try something as what is happening right now is not good enough. To loosely quote the great Ronald Dale Barrassi, if you launch a thousand attacks one has got to work. 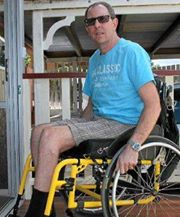 About the author: I have been a cyclist since the age of 10 when my parents first bought me a bike. I used a bike on and off to get to school and work for 31 years but did not see myself as a cyclist. It was when it was too far and not suitable road conditions to work, that I finally came out of the closet and confessed that I was a cyclist. I donned lycra, joined a tribe and rode more kms than ever and strangely drove more kms to get to work than ever. At the age of 46, this all ended when I was struck from behind by a truck whilst oddly I was out riding by myself. I sustained a spinal cord injury and I lost all bladder and bowel function and partial use of my legs. I did not lose my sense of humor and during my ordeal, I almost lost my will to live. Today at 47 I have an extraordinary wife and two young daughters and the will to live and hopefully walk again. Whilst I can't cycle anymore, I want others and especially my girls to experience the joy that is cycling. When asked why I rode a bike, I said I can't explain it. Try it and see why, it is amazing. I am poorer because I can no longer do it, but I can enrich my life and others lives by letting them experience the pure joy that I did.

I have really only embraced social media for the last 12 months, what else can you do when you spend some much time flat on your back  I almost failed English at school, so please don't pick on my grammar, spelling and just bad writing.