From the same mate in the local cycling club...

It's November 30, 2013. The Club leaves at 6am on our Xmas ride. A very tidy bunch of 16 riders sets off for our destination of the Newport Arms Hotel via Bobbin Head. After the Spike Milligan Bridge near Woy Woy a green ute squeezes past, just clearing the front riders by about 10cm. It was clearly the drivers intention to send a message that we should not be there and he was not prepared to make any concessions to another road user. Certainly not for bike riders. Despite the expected heavy traffic at the Sydney end we complete the rest of the ride without incident.

I have ridden about 4,500 since the Xmas Ride and I have had just one other close call. Coincidentally it was an almost identical scenario. This time the ute was white. Both times the drivers actions were intentional and unnecessary because it was early morning with very little traffic. Perhaps that's why they did it, thinking they would not be seen. Clearly they were not thinking, because imagine what their life would be like if they seriously hurt or killed someone.

In this time interval, there have been literally hundreds of times when motorists and their passengers have shouted abuse, blasted their horns, tried to startle us with a shout, tossed rubbish, flicked the bird, impress us with the exhaust note from a big acceleration whilst passing or faked a swerve as they pass. There is also that annoying thing where they make their turbo's go whoosh whilst adjacent. I wish I had a dollar for every time I heard the bon mot "G.O.T.F.R." (Get Of The ... Road). Stupidity like this is not really a huge issue for experienced riders. It's also amazing how little impression it has when the car is on the other side of the road, sometimes separated by a median. However, I would hate to be on the receiving end of all this if I were a new rider.

Now for some balance.

My observation is that there are more and more motorists who "get It" when they meet cyclists on the road. it's not so uncommon to get a cheery wave and a smile. Often drivers are going out of their way to make it easy for us. Sometimes I even wish they would not be so (excessively) polite and just get on and get past. I am sure sometimes they are intimidated by us and/or just plain timid. Maybe we can help them get over that by communicating in a patient, consistent,direct and polite way. Can we make each congress a positive educational experience for the drivers?

The biggest risk for the relationship between road users seems to be the press. Rags like the Clover Moore hating Telegraph, ratings grabbing "current affairs" TV and in particular unrepentant idiots like Derron Hinch, who continue to light the touch paper for the rednecks out there.

I am hoping it's not my over active optimism but even here I see a different sentiment is some reporting. The aftermath of the 6 riders hospitalised on Southern Cross Drive was sensitively handled. On the flip side of that, traffic congestion in Brisbane near a footy match was blamed on the 1.5m passing laws, and another boofhead football commentator claimed it's not yet illegal to "door them". Is it?

How to stop it? No idea. Can we diffuse it by not reacting? Do we get camera'd up and be prepared to pick a battle and go hard with it?

I would just prefer to ride and have fun doing it. 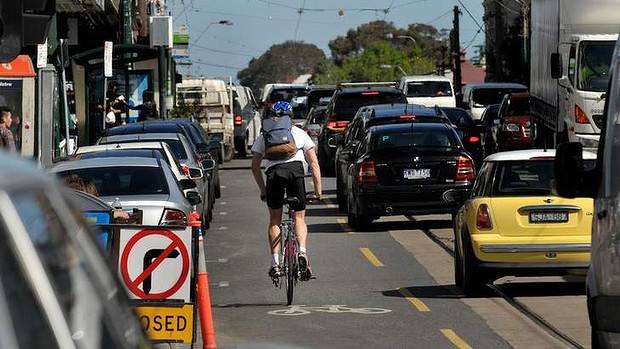