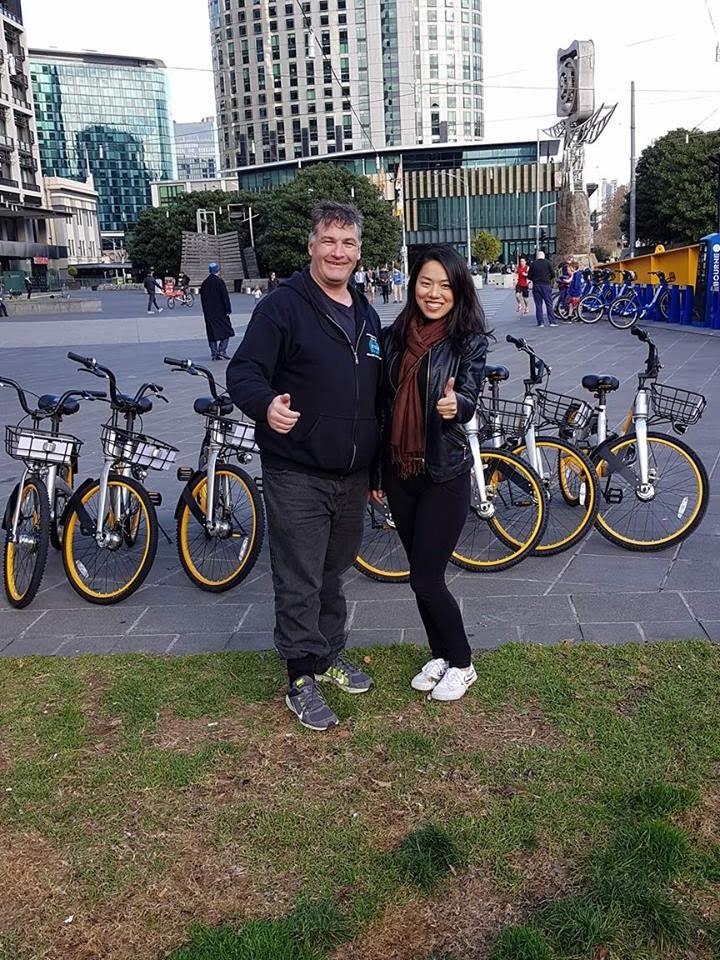 Reddy Go and oBike dock-less bikeshares hit the streets of Sydney and Melbourne respectively with a lot of media attention. During the weeks preceding and following their launch, fears were generated of waves of broken bikes littering the streets, several organisations reviewing the bikes and systems, and speculation on what this so-called “disruptive technology” will do to our cities. Mostly people are excited and positive and the media attention is valuable free publicity. It is estimated Melbourne now has about 1000 bikes and in Sydney they are spreading out all over inner city, even crossing the harbour and ending up in Milsons Point, with plans to expand to other councils like Parramatta.

Given the fact that the two existing public schemes in Australia are struggling, the question that comes to mind is how will these ones perform? Will they survive?

Most of the discussions about bikeshares and their success to date were around public systems, like the ones we have in Melbourne and Brisbane. Adelaide also has a scheme which is free to use, but it runs on a different model, because you have to return the bike to same location. There were plans for something bigger, but a commissioned study warned that the city is still too car centric and that they shouldn’t go ahead as long as helmet laws are in place. Australian public schemes are often considered failures, compared to similar international models. Brisbane’s City Cycle at some stage was losing $1 million a year. Complex sign-up processes (which was improved), lack of cycling networks, station distribution and bicycle helmet laws are often cited as the reason for their failure. 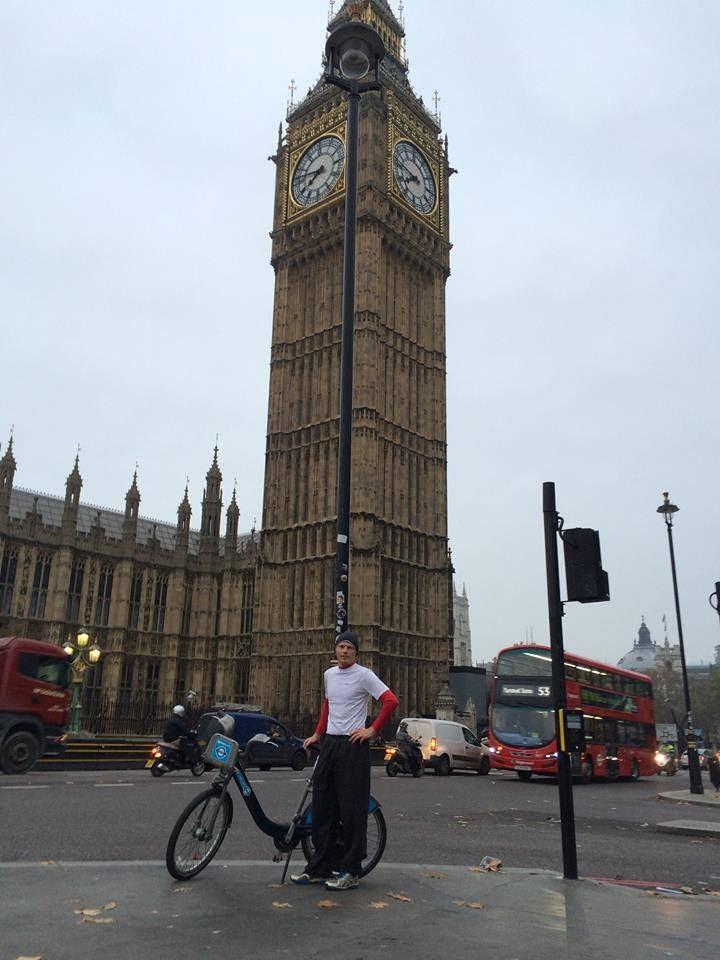 It is also often noted that all public bicycle hire schemes operating in locations with helmet laws struggle heavily, with Seattle’s scheme closing down not too long after it was opened. Vancouver is looking a bit more promising, but it is still early days. Brisbane and Melbourne are surviving and showing signs of slow improvement, but still have a long way to go when compared to schemes like Velib in Paris. Surveys revealed that the helmet requirement is a big factor (bigger than weather), and there is no doubt it will affect numbers. Helmet choice campaigners often mention these schemes’ lack of performance as an argument against helmet laws. Some cities, like Mexico City, scrapped their laws before starting public schemes.

But these schemes are publicly owned, usually by councils. Although Sydney doesn’t have a public one, there are already small private hire schemes. Spinway is one, which operates in a few locations around Australia. There are other examples, including a new scheme recently opened in Perth. The point is that we already have private bikeshare systems operating ‘successfully’, but because they are privately owned, we can’t really tell if they are thriving or just surviving. However, these two new schemes are at a different scale and while the existing schemes are more aimed at tourists that stop and start at the same place, the dock-less schemes operate on a similar model and scale to the public share systems.

Private schemes’ success will be measured in dollars. As long as they generate sufficient money or show potential that the investment will produce timely returns, their owners will keep them running. On the other hand, the most commonly accepted measurement of success for public bikeshare systems are trips per bike per day. Of course, usage rates and financial performance are related, but the goal of the public schemes is not to make money – it is to get more people riding and alleviate pressures on other modes of transport, including driving. Preferable they want to run without a loss, and making money would be a bonus. Australian schemes’ usage rate sits under 1, while Paris is at 6, NYC at 8 and London, somewhat disappointingly, at 3. Maybe we are lucky in Australia that we have committed councils who are happy to help to keep them afloat and treat their financial operations similar to other modes of transport - which is all heavily subsidised. Also, for councils that are consistently criticised for not doing enough for cycling, closing them will be a political nightmare. 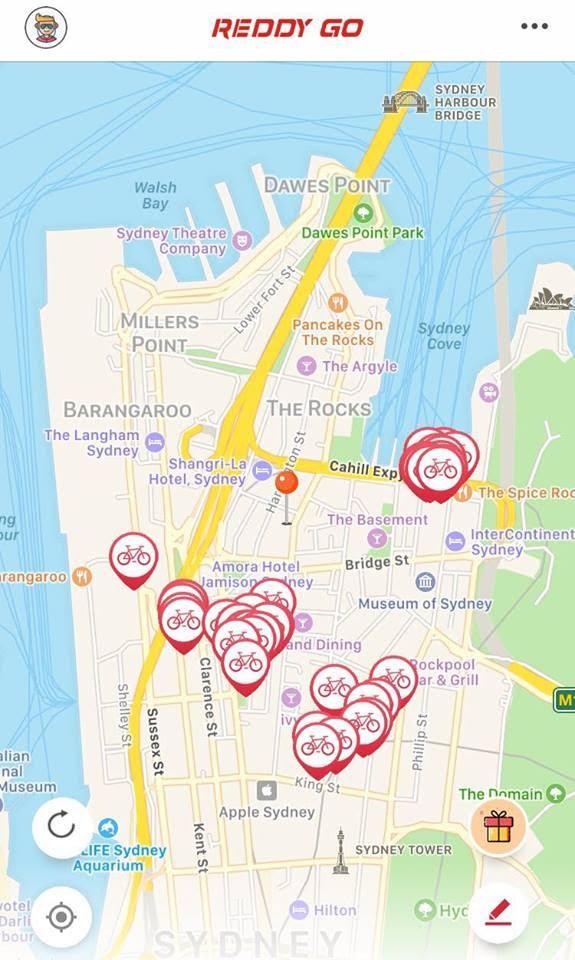 So, will they survive?

Factors influencing success are complex. Lack of an integrated cycling network and helmet laws have put a halt on Sydney’s plans for years, but the city started a feasibility study recently, so there must be some optimism.

With our new private systems, key factors are that their operating cost is lower due to the brilliance of the dock-less model and low cost of the bikes. Not having to invest in docks or the administrative costs around that reduces initial set up costs. There are also less costly delays caused by negotiating space for docks.

With docking models, bikes need to be moved from full docks to empty ones on a regular basis, because an empty or a completely full dock presents big problems. With dock-less, they still move bikes back to popular locations but it is less critical and there are probably a lot less resources allocated to rebalancing. Of course there are other labour costs, like maintenance and there is also a small monthly cost per bike for the GPS tracking mechanisms.

One has to wonder if City of Sydney and other Sydney councils where Reddy Go plans to extend to, will invest in a bikeshare, since a private company is taking on the pains that go with it out of their hands. As long as residents get a fair deal, I think it is unlikely. Their timing and willingness to jump into the deep end first, will probably contribute to Reddy Go’s success, while oBike has to compete with Melbourne’s public bikeshare. 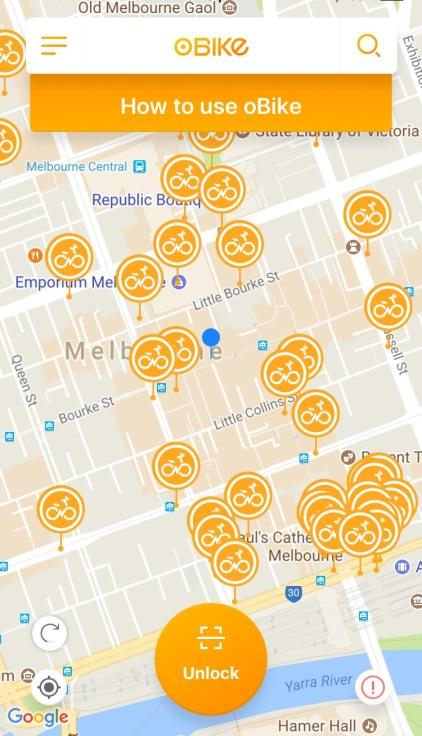 The other aspect that will play a role is the police tolerance for helmetless riders. The helmets are certain to be lost or stolen as is the trend with public systems, although the locking mechanism is likely to reduce this. When finishing the ride, one is supposed to secure the helmet inside the built-in lock, which also locks the wheel as an alternative to docking the bike. I have spoken to someone who has been riding helmetless (with a medical exemption) in Sydney for many years. He told me that since Duncan Gay was replaced by a new roads minister, the amount of times he had to present his certificate dropped dramatically, but the attention the system is getting might just cause a reaction from the police, especially the NSW Highway Patrol, who is rumoured to have low levels of tolerance for cyclists and who are also the driving force behind Operation Pedro, the regular crackdown operation on city riders (which is also dramatically muted since the changes in NSW parliament).

Another aspect that will play a role is the apparent low cost of the bikes. It is very likely it is less than the registration fee ($99 in Sydney).  That is the costing side. Let’s make a few guesses on income.

There are now about 1000 bikes on Melbourne streets. Our public bikeshares are getting close to 1 trip per bike per day. Let’s pessimistically assume these schemes do half of that, or 500 trips per day for the fleet. Most bikeshare journeys average around 3km per trip, which equates to a $2 trip and means at least $1000 margin per day, or $365 000 a year. That is a wild, pessimistic guess and rumours are the number of bikes released already is just a small start. One also has to look at costs like staff, marketing and also cash-flow generated by refundable registration cost. Also remember that Australia is not the only place where they will operate and oBike already has a presence in 7 countries, so we are talking big business. It definitely looks promising and with profit being the main objective, there is a good chance of survival.

Bikeshares offer great opportunities and have fantastic safety records. In the USA, the first 23 million trips went without a fatality. They get more people riding, are a great tourist attraction and can help city centres be less car dependent. Because they are GPS fitted, the data collected will be valuable to councils and other authorities, showing us trends in cycling behaviour, which can assist with future planning. It could be another source of revenue, but hopefully they will share the data for free in good faith of operating on public space. This is why local governments love them – they have direct, immediate, measureable benefits if they run successfully. However, our state governments need to do their part to make sure they reach their full potential. 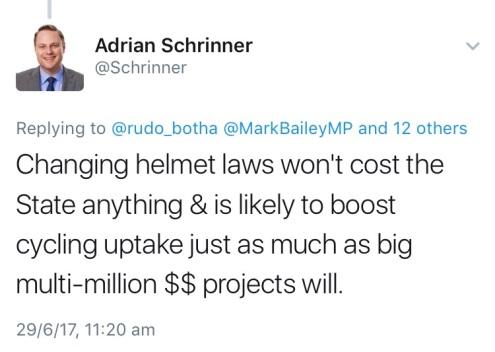 Although some overseas public bikeshares are able to run in places where infrastructure is similar to Australia’s, infrastructure is, generally speaking, still the most important aspect to create a healthy riding environment. A lot of the roads and funds are state controlled and our governments’ “record breaking” financial commitments to establish cycling networks are laughable when calculated per person spent. Other measures like smaller and slower streets, better designs for intersection, equitable traffic light green time are barely looked at. The focus is still pretty much on maximum car throughput (which doesn’t work), with Sydney’s budget for motorways now surpassing $50 billion, while other places are ripping them out.

These decisions are costing tax payers, restricting peoples’ movement (especially younger and older generations), and will also hurt private intuitive enterprises like Reddy Go and oBike, but I would say, not kill them. Hopefully their presence and uptake will once again affirm that people want active transport and that the bicycle is still a simple tool that can solve complex problems.

I certainly believe these schemes will play a role in shaping our cities and we should welcome these organisations with open arms and support them as much as we can. It is a fantastic opportunity that we have to embrace and a great advertisement for the possibilities of active transport for the future. With or without our state governments’ support, they will help to put cycling in its rightful place, but we can help to make sure it happens to the extent where everyone benefits, even for those who never get on a bike. 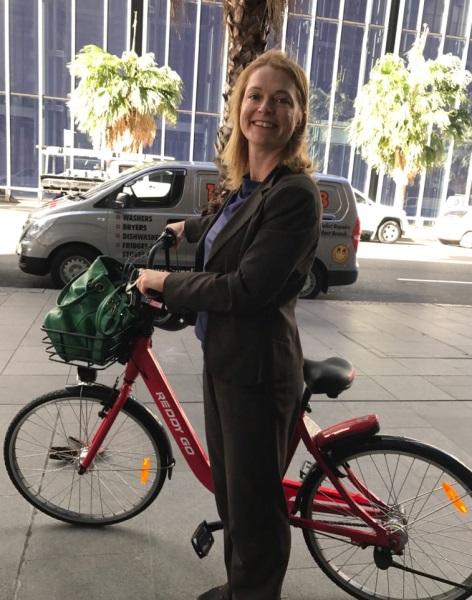 Three of Cycle directors had a spin on the bikes. Edward met with Han from oBike for an interview and went for a spin. Sara was the first to try Sydney’s Reddy Go and I followed the next week, with a short ride over the Sydney Harbour Bridge.

As other users reported, the system is very convenient. The ride was very much what I expected based on my experience using a Boris Bike, but the bike seemed lighter. The front light was better than the one on my own bike and the bell had a nice ring to it, once you figured out that is the grip-shifter on the left of the handlebars. I tended to oversteer a bit because I was not used to the wide handlebars.

Sara was full of praise as well, but felt the gear ratio was a bit too high. Either way we both agreed the bikes are overall pretty good.

I had one big problem – the helmet didn’t fit. Well, personally it didn’t bother me too much that my helmet strap couldn’t lock, because I was slowly plodding over the bridge. I also had an issue with the gears slipping back from third to second. When you finish your journey you can give feedback and ReddyGo quickly responded with a refund, promise to check out the bike and said they already have plans to upsize all the helmets based on previous feedback received.

Overall I was impressed and happy with the feedback and the scheme. They seem to be committed to make it work and fears that they are simply going to dump hundreds of unusable bikes appears to be unfounded.