I was hit by a car driver while out for a ride in the middle of April.

Doesn’t seem to be too much unusual in that these days.

Beautiful sunny day. Front and rear lights flashing. Riding in the dedicated cycle lane. Life doesn’t get too much better.

The route I was riding is hugely popular with Perth cyclists. A few cars passed me giving me plenty of distance, all respectful drivers. 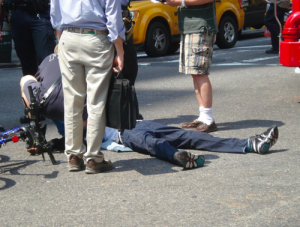 The last one to pass me started to slow down (I figured for the roundabout he was about to enter). Approaching the roundabout from the direction we were heading the options are either go straight or turn right. No worries thought me.  Without indicating, the car turns left to go up a footpath to enter a car park rather than proceed 150 metres through the roundabout to the car park entrance.

Long story short, bicycle and I hit left fender of car doing about 35km/h. 95kg of me sails over bonnet and lands heavily (how else was I going to land) on the road, closely followed by in excess of $6000 of uninsured carbon fibre and various aluminium bits.

Shoulder and head hit the road, hard. I’m lying there looking at the licence plate of the car, trying to commit it to my memory, hoping the car doesn’t just drive over me, or back up and take off. It doesn’t move.

People gather around, someone asks “do you want an ambulance?” “That would be lovely.”

A fellow cyclist stops, he is a doctor. He gets me out of harm’s way, and checks me over. “ I reckon your clavicle is broken, but other than that you seem ok” says DR Phil. 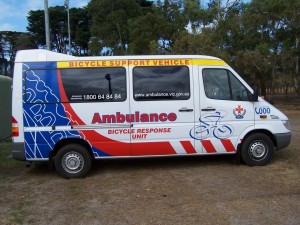 The police also happened to be passing, so stop to help with the scraping up of the cyclist.

At some point in time the ambulance arrives. The ambos set me up with a green whistle. It tastes like shit, but helps with the pain. When people tell you that a broken collar bone hurts, they are right. I know plenty of people who have broken them and I’ve thought, “ it can’t be that bad”. Turns out, it is.

The car driver comes and sticks his head in the ambulance, and apologises again. He gives me his business card.

Off to hospital to sit around all day, but the medical care or lack of is another story.

One of the police men from the scene comes and finds me in the hospital and tells me they charged the driver with careless driving, (6 demerit points and a $500 fine). He makes sure I have all of the appropriate details.

The next day the car driver contacts me to enquire as to my health and to apologise again.

Over the next couple of weeks the driver stays in contact with me via text message, to check on my well being and to keep me up to speed with his insurance claim. He obviously admits complete liability to the insurer, as they ask me for photos and some more photos, but never once dispute the circumstances surrounding the incident.

About 14 weeks after the accident  the insurer provides full re-imbursement to me.

While I wish I hadn’t been hit, it was better to be hit by a decent bloke who just did a stupid thing, rather than an ignorant lying deceptive pig.

I have suffered physically and mentally from the accident. I know he has suffered mentally, and probably constantly replays in his mind “what if”.

One of these days I’m going to ring him up and buy him a coffee and tell him it’s alright.