There were a number of witnesses in Court on Day 2 today – in fact, ten witnesses in all. In this summary, for simplicity, we have grouped these witnesses, thus they will not be discussed in the order of their appearance.

The first grouping only includes Senior Constable Potts, Chief Investigator for the AFP. Next we report on two expert witnesses, one reporting on fatigue, and the other reporting on road design.

Following that, we cover the only private witness, who was the media manager for the IPWR. We then conclude with summaries from seven motoring witnesses who saw a cyclists on the Monaro Hwy that morning – three who appeared in person and three who gave evidence via phone linkups.

Senior Constable Potts took the stand. He was the AFP Officer in charge of the investigation.

In cross examination, Senior Constable Potts was asked about the lux (light coverage or lit area) of the front light of the driver's car, and whether the driver had been over-driving? The Coroner said that the lux topic had already been dealt with, and that Potts was not an expert regarding over-driving.

There is still confusion whether another car was in front or behind or beside the driver, or if another car was even present. In the notes made by Senior Constable Potts at the hospital the day of the crash, the driver mentioned “a car in front”. In subsequent interviews, the driver did not mention a vehicle “in front”. This discrepancy was not followed up by the AFP.

In a yet-to-be-presented driver statement (driver 7), the driver who was waiting to turn onto the Monaro Hwy mentioned that he thought he saw a few cars coming towards him on the Monaro Hwy from the south. In a second interview, this driver stated he couldn’t remember if there were one or two cars coming. Senior Constable Potts conceded that if there had been a car in front of the driver, this could have affected the driver’s visibility.

Senior Constable Potts was questioned again on what the driver could see in front of him from his low beam front lights. This distance grew over the various interviews, from 15 metres to half of a 100-metre football field. No further testing of the car lights took place.

It had been inferred that Mike may have been swerving on the road. When Senior Constable Potts was asked about the angle at which Mike’s titanium bike frame was impaled into the left side of the car’s bonnet, he agreed that it was at a straight angle and that the bike therefore would have been travelling in a straight line and not swerving.

When asked if the Abdullah Zainab documentary video was more likely to be more accurate [that the AFP reconstruction bike video], Senior Constable Potts replied “Yes”.

At the end of this cross examination, Senior Constable Potts was thanked for his time by the Coroner and dismissed.

An expert on fatigue made the following statements:

An expert on traffic signals from ACT Roads was asked to attend the crash scene.

This apparently is standard practice. When asked what his role was expected to be, he stated that his role at the crash site was to see if the line markings, etc., were correct.

Most of his answers consisted of: “I am not an expert in that area.” When asked by the lawyer from ACT Roads if the road markings were accurate at this intersection, he responded with “Yes, they were”.

Cycle stopped taking notes on this expert witness at this time.

THE ONLY PRIVATE WITNESS

The media person for the Indian Pacific Wheel Race gave evidence about her role and activities during the event. On cross examination she explained that this event was not like a regular bike race that required closed roads, police resources or public awareness of potential disruptions to public road access. It was an event that started with 70 participants, and dwindled to 42 on the morning of 31 March 2017. Uniquely, the participants rode longer distances and carried personal supplied on their bikes.

In fact, this event is no different than people commuting on public roads – sometimes at five o’clock in the morning or at nine o’clock at night, for example.

The first driver witness got in touch with AFP the afternoon of the incident. He gave his statement to AFP in September (year uncertain) because the APF didn’t get in touch with him before then. He may have been driving slower than 100 km/h as there were a lot of kangaroos about. There were pockets of fog. He has his high beams on. He said he was within the lane but that he tended to drive more to the left of his lane to avoid colliding with kangaroos on the road. Then the cyclist was “just there”.

The driver swerved to his right because he almost collected the cyclists. The cyclist was riding within the verge. But the verge was narrow there. “It was close. I can’t imagine how this felt to him [the cyclist].”

Driver 2 had extra headlights and had previously hit wildlife three times. The driver had their high beams on, and saw a cyclist on the left, quite lit up. There were no issues with visibility. The driver clearly saw white reflector stripes on the cyclist’s right arm (the left arm was not visible to the driver), but did not see any white stripe on the cyclist’s back. His legs “stood out” as his calves were exposed. The driver was travelling at 70 to 80 km/h due to the risk of wildlife on the road.

Driver 3 was travelling south from Tumut in a speed-limited truck set at 97 km/h at 4:30 am. The driver saw a white headlight coming towards him on the other side of the road. “It was pretty bright.” The driver first thought it was a car with only one headlight, or a motorcycle. The driver then realised it was s cyclists. The cyclist turned right into a service station, crossing the path in front of
the truck. The driver stated that the cyclist performed this manoeuvre close to the truck, but the driver felt there was no need to apply any brakes.

Driver 4 had high beams on, because of the risk of hitting wildlife. “It’s a bit of a dangerous drive, really.” He was driving at the posted speed limit, which was 100 km/h. The driver said he saw a cyclist wearing dark clothes, with no lights (possibly a dull red rear light), no reflective equipment, and no helmet. (Let’s leave this one here.)

Driver 5 was driving at 100 km/h using cruise control. The driver thought he saw the white eyes of a deer, but he didn’t brake. “I felt the white light was as bright as candlelight.” The driver didn’t see a red light or any reflective material, but kept looking for the deer. “All of a sudden I had to swerve around a cyclist. I was nearly right on him.” The driver rang CrimeStoppers within a few days. AFP
contacted him four months later for a statement.

Driver 6 had previously hit two kangaroos. He saw a something about 300-400 metres in front of him that morning. At about 200 metres it became clear that this was a cyclist. The driver moved right and safely crossed the centre line to give the cyclist the plenty of room while he overtook him. The driver observed two red lights, and a front light, but did not recall seeing any reflective material. 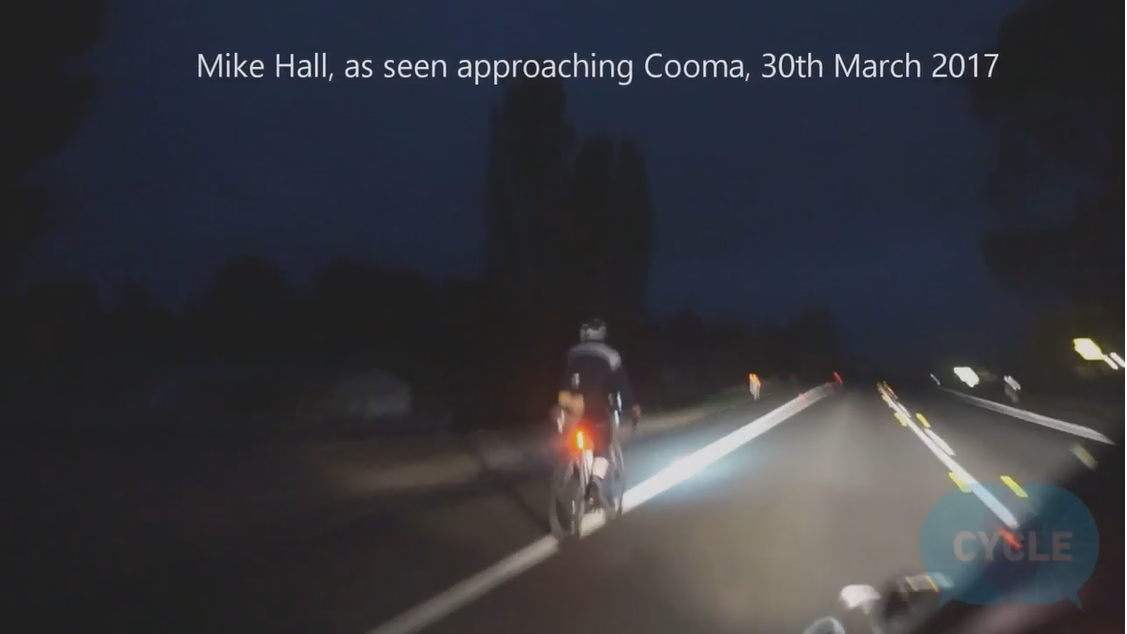 The first day of the inquest proceeded mostly as expected:

Cycle has some questions – in the public interest – pertaining to the evidence presented. These questions are expected to be addressed in the coming two days, and include the following: 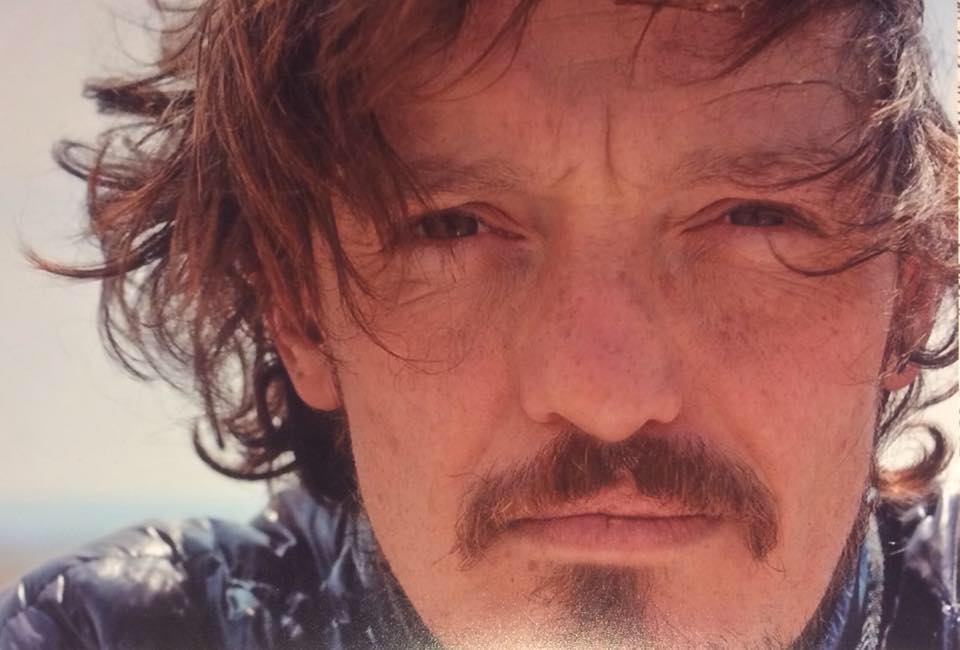 Mike Hall was struck by a car on Friday, 31 March 2017, on the Monaro Highway south of Canberra at approximately 6:22 am. Mike was riding a bicycle, and was on the correct side of the road. He was struck from behind, and died from his injuries at the scene.

We know that Mike was an experienced cyclist who had participated in a number of international endurance races. In March 2017, Mike was participating in the IPWR, a race from Fremantle to Sydney.

We know from two videos that Mike’s rear lights were sufficiently bright, and that the make and model were high quality and well respected.

We know that the ACT Police have not yet laid any charges in relation to this matter, and the name of the driver has not been made public.

We know that the ACT Coroner is set to hold a Coroner’s inquest into Mike Hall’s death from 24-26 September 2018 in Canberra. Mike’s former partner, Anna Haslock, will be in attendance.

Since the accident some rumour and conjecture has been circulated and we feel it is important that any rumour is treated as such and that the inquest is given the space and time to proceed before conclusions are determined.

Cycle hopes that the ACT Coroner has been presented with full, complete and balanced evidence regarding the circumstances surrounding the crash that killed Mike Hall and that following the inquest the public will come to know the full circumstances of Mike Hall’s death.

The findings and recommendations of the ACT Coroner are important.

The findings and recommendations are important for the future safety of those – both residents of and visitors to Australia – who ride a bicycle on public roads in Australia.

The findings, recommendations and any subsequent actions by ACT Government and Police are also important for the family and friends – all over the world – of Mike Hall.

The Australian Cycle Alliance inc will have representatives at the ACT Coroner’s inquest.