We have found it difficult to write up the proceedings from Day 3. And that is for many reasons. It has been a difficult week for all involved in this Inquest.

The report from the Coroner is due in January 2019. So, we will have to wait until then to hear what the findings and recommendations will be. And it is not our job to pre-empt the Court.

Our hearts go out to all friends of Mike, and of course to his family, too. And a big thank you also goes out from Cycle to all those who sent words (and likes) of support to Anna and the family. A thank you also goes to those who sent us previously unknown footage of Mike in his bright reflective clothing (that the AFP did not retain as evidence) with his bright lights, not to mention the photograph of the reflective leg warmers he showed to dot watches in Omeo because he didn’t feel safe enough riding on Australian roads at night (as he posted on his Twitter feed). 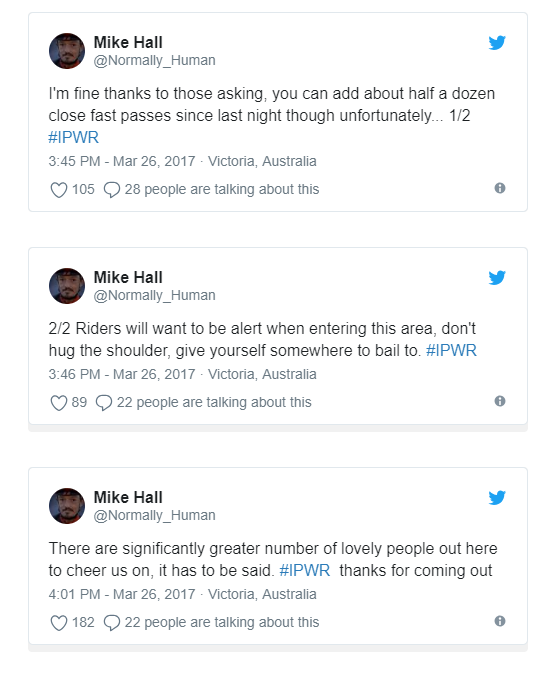 The upshot of all this is that, in our opinion, it has been shown that Mike was doing nothing wrong, was following all Australian/ACT road rules, and was extremely visible that morning on the Monaro Highway.

To start Day 3, a phone linkup with a driver was established.

This driver said Mike was hard to see, and was wandering, not in a straight line. When the driver was shown a video of Mike from the previous evening where he was bright and visible, the driver replied: “Not what I saw, no flashing light.” This driver was then thanked for his testimony.

After a short break, Senior Constable Slater of the AFP gave evidence. He was on duty at the time.

He said he passed Mike, going south, at around 5:40 am. He viewed a white light that was brighter than the surrounding posts on the side of the road. Once he got past Mike, he looked back and saw a red rear light and the cyclist’s legs going round. [Cycle suspects this would support the hypothesis that Mike was wearing the new reflective leg warmers that he purchased in Omeo just days earlier. This would corroborate what two other witnesses also claimed to clearly see.] When shown the video of Mike from the previous night, Senior Constable Slater agreed that this was similar to what he saw on the Monaro Hwy that morning. When asked if he thought he should have stopped to talk to the cyclist, he replied that he has asked himself that many times. [Cycle is not surprised he did not stop to talk to the cyclist, as according to the officer’s own statement he could clearly see that the cyclist was compliant with all road rules. Cycle would like to send a personal message to this officer saying that to stop would have been taken offesively as Mike was well within the law, so he should not feel guilty for not stopping.]

A number of additional witnesses gave evidence about what they did when they arrived at the scene of the crash. We will not report on much of that, as it is not relevant to us understanding what lead to the incident in the first place.

The driver, Mr Bobb, was scheduled to give testimony on Day 3. However, being represented by Counsel Assisting, and under direction from the Coroner, Mr Bobb was not allowed to give evidence. Among other things, the Coroner said that Mr Bobb was ‘highly suggestible’, young and quietly spoken. The Coroner said that the hearing could rely on existing interviews in which the driver, Mr Bobb, said he simply did not see Mike. The Coroner also said that it was in the interests of justice that Mr Bobb be given a certificate (an exemption from giving evidence in court). [Cycle will not comment on the proposition that simply not seeing a cyclist means that a driver of a motor vehicle is automatically not guilty of any offence without a thorough and proper investigation of the circumstances and all the evidence.]

Additionally, Mike’s mother Patricia did not wish to compel Mr Bobb to give evidence. [Mr Bobb did speak to and embrace Mike’s mother, Pat, after the Inquest concluded.]

[Cycle notes that it is not the role of a Coroner’s Inquest to find criminal guilt, or innocence. It is simply the role of the Coroner to determine, if possible, the cause of a person’s death if it is not already known and to assertain fault.]

Regarding the photo of Mike wearing newly-purchased reflective leg warmers in Omeo, the Coroner stated that the photo does not prove that he was wearing them the night he rode from Cooma towards Canberra. [As an expert in long-distance riding, Heath Ryan suggests that as it was 3 degrees that morning in Cooma, and dark, and that Mike Hall had posted concerns about Australian drivers on his twitter account, he most assuredly would have been wearing his reflective leggings instead of carrying them in a bag.]

The Coroner thanked the AFP, acknowledged Mike’s mother, Pat, and Mike’s partner, Anna. She also mentioned her admiration for Mike’s skill and ability in his sport. 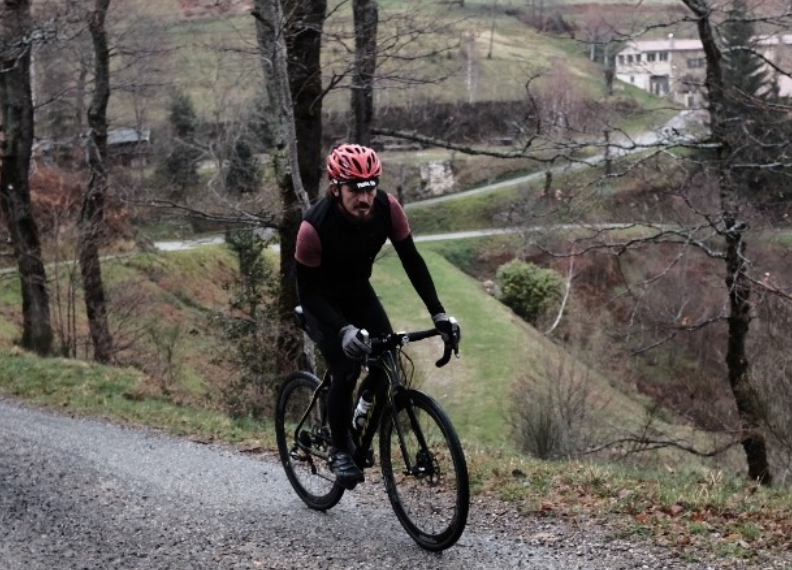