What is it about bicycle riding that confuses people? 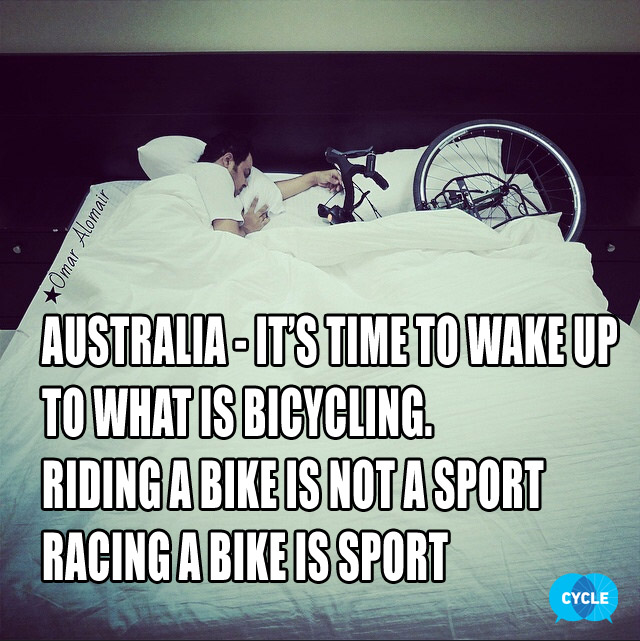 There was once an Australian Prime Minister who we thought was going to be the one to put bicycle riding on the map, he was going to save us from the freeways, the by-ways and improve the way of life because he was a cyclist himself. And we thought it was great.

But he didn't fight for cycling, he put it behind everything else and ignored it. Just like everyone else does in positions of power, the ones that can make real change.

Respect is a strange word, and it is often misunderstood.

The dictionary defines it as: ‘due regard for the feelings, wishes, or rights of others.’

But society defines it as something to be earnt and hung over the head of every person on the road. A motorist says to a bicyclist “I will respect you when you respect me” and this leaves a feeling of confusion. Why would I need to earn the respect of every single person that drives a vehicle on the road? Why is it that I personally should make an effort to ensure that everyone is OK with me being on my bike in the first place?

So after a lot of thinking about this I thought I would list my ideas about what ‘Respect’ means to me and how it should reflect on you. Respect is not earned on the road, it is granted, we grant it in the way we drive, ride or walk. It is the way we are kept safe from each other and the way we allow each other to move around. It is not something that should be expected to be returned, it can not be.

Respect is the feeling you offer to a stranger, that little more room, that wave to apologise when you make a mistake. It is seen in the eye contact you make to the driver, or that look of acknowledgement you make to the rider. It is simply

accepting that another person is on the road and it needs to be shared.

When the RACV posted this story on their website from the upcoming Royal Auto Magazine - the world almost ground to a halt.

"Has the RACV become a front for the bike lobby?", "Has the RACV Board been taken over by lefties?", "I'm pulling my insurance" - these were the cries from #Motordom.

From the others were the cries of "Wohooo, RACV gets it, they are my best mates." and "Yip, that sums it up, all drivers are barking dogs." Well before you get too excited, let me explain something here. This is not a news piece, it is not an advert, it is an editorial (mind you it is a damn good one, but it is an editorial none the less).

The editorial is about how we are losing our humanity. Our empathy on the roads is reducing through our desire to make it from A to B in the quickest time possible.

This is not just a traffic problem, it is societal and it is encouraged from the top down.

I have personally heard this 3 times in the past 5 ½ years. The last time was almost 2 years ago. The cost to me was a replacement shoulder and AC reconstruction later that year. Nowhere near recovered and now with an official 27% WPI (Whole Personal Impairment) I have a young P-plater to thank for this. He honestly did not see me in my high visibility fluorescent jacket and back pack, right in front of him on the roundabout when he failed to give way to me one morning. And that was his honest reply when I asked why.

Despite all this, I am still riding. Not as much but I am trying. The one dread I have is traffic from behind. Will they see me? Will they give me space? Will they give me at least a metre? It’s the one thing I have no control over on the road. If there’s a bike lane of course I will take it, and a shared path if it’s safer and not too far out of my way.

In Australia it is a sad fact that infrastructure is being built first and foremost for motor vehicles. The next thought goes to pedestrians and their safety. Cycling facilities come last down the list. Add on to that the thought though that if you’re going to build a footpath perhaps it’s possible to build it a bit wider and make it a shared path. Lots of room for everyone and a cost saving. No having to accommodate cyclists with a separate pathway. They can share it with pedestrians. The risks to cyclist’s safety are lower and despite the risk to pedestrians with the increased potential for conflict with cyclists, these risks are by far the lesser when compared to the risk and seriousness of injuries from motor vehicles v cyclists.

So this is a cost saving exercise.

There are many problems with is, and one of them is that they often don’t go where you want to go. They take you out of your way. Not too much of a problem as you can take the roads if needed. But this happens with many routes to destinations. That’s the beauty of the bicycle as a mode of transport. It’s personal and it can go almost anywhere.

Back to my point. 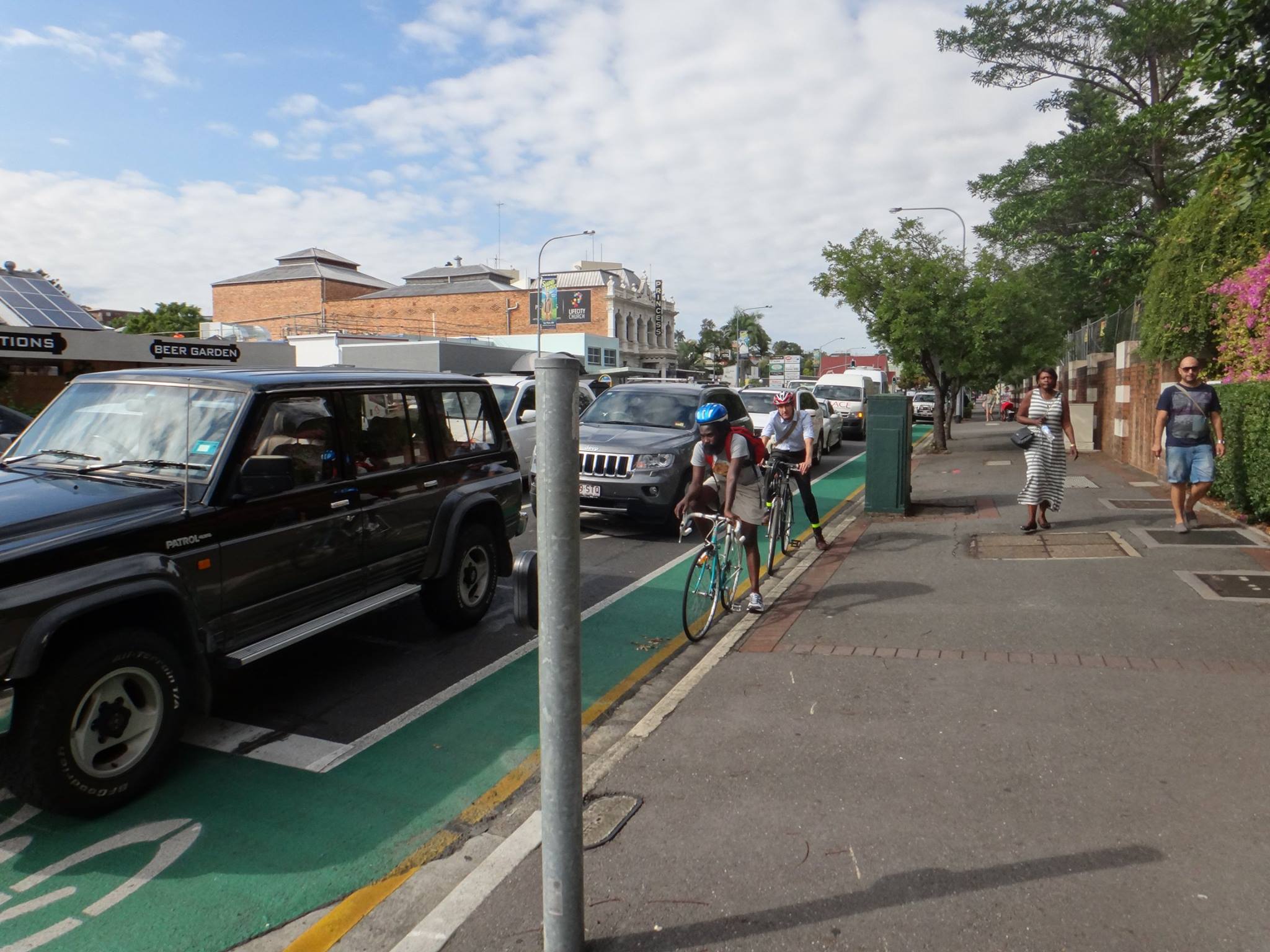 A recent challenage to the Cycle team was to go out and take photos of commuters. It was to show how much Lycra is worn in the different states around Australia and compare them to Melbourne where I knew Lycra was on the decrease for the morning ride.

I was deeply disappointed when the photos came in, it was image after image of people riding wearing normal clothes. One by one the fdifferent images were sent to me and the more that I saw the more impressed I was. It was like a bigots nightmare, a news desk editors worse hell. The amount of Lycra is going down.

Now first of all I need to say that Lycra is not a demon material, it is actually a brand. The real word people should be using is Spandex. And the fascination against this material is comical, to the point that our mediia use it over and over again as a derogatory term to describe cycling in its many forms.

But riding a bike is not defined by the clothes you wear, on the day I took my photos, I was in full Cycle Kit, Lycra top to bottom. I dont wear cricket pads to swim on the beach and I dont wear foot clothes to play tennis. I wear appropriate clothing for what ever I am doing. Lycra is comfortable for long rides and therefore I will wear it.

But the images we have here show the ways we have grown and how our cities are changing with more people opting to ride to work ready for work. No shower required. And in fact it is rare to need a shower on a casual ride to work.

The Cycle take on this literary masterpiece. All of Cycles comments are in Italics in Brackets. 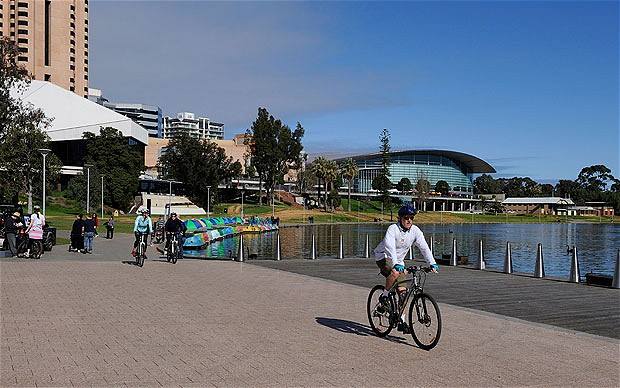 FEW issues divide the Adelaide community – and some regional cities – more than cyclists. It’s hard not to have a view about cyclists. Hard not to stand on either the black square or the white square. (What a load of rubbish, most cyclists are motorists after a certain age)

You either love them or love to hate them. They are an environmental asset or a traffic nuisance. They are safe, they are dangerous. Cyclists are courteous, they are rude. (Oh, till that last bit, I thought they were talking about Prius drivers or other motorists, I would not describe most riders like that at all)

But it’s not that simple. Cyclists are tribal. Some are quite different to others, just as lions are different to tigers and leopards. The tribal make-up works something like this: (diatribe, some of us own multiple bikes, ride many disciplines, it really is as simple as saying - but like ANYTHING, there are groups and subcultures)

THE COMMUTER: Often travels solo. Wears slacks, jeans, shorts and even business clothes. Regulars on designated off-road tracks through parks, as well as main street bike lanes. Usually carry a back pack. Generally polite and considerate. (This would be the view held by Bicycle Network who believes that 12kms is as far as a commuter goes. Bad news Rex, commuters come from further, are many things, ride many different bikes, wear different clothes)