Most people familiar with the topic of bicycle helmet laws knows what a stir it creates. But the same people, on either side of the argument, would also know about the common fallacies that gets brought up when discussing the topic. And the same ones comes up again and again. People advocating for helmet freedom have heard them all and have explained them again and again. And at the same time, people defending helmet laws, certainly don’t want these fallacies to be mixed up with concrete arguments.

There are scientific studies available, both for and against. If you really serious about getting involved in the conversation, do a bit of research - there is plenty of good material out there and there is no need to fall for the logic traps.

Although I wrote this piece from a mandatory bicycle helmet laws (MHL) repeal point of of view, it’s primary purpose is not to convince anyone that MHL’s should be repealed and it also doesn’t focus on evidence for repeal. Instead its purpose is to point out the numerous fallacies brought up when talking about MHL’s. It is also not aimed at addressing all the arguments against the repeal of helmets, but only concentrates on the most often mentioned fallacies and flawed arguments.

Once these fallacies are put aside, a real debate can happen.

1. Riding without a helmet? That’s crazy. Darwinism at work!

The thought of riding without a helmet sounds farfetched to Australians who have been living under helmet laws for more than 20 years. The sight of someone without a helmet is very uncommon and most people came to believe it is the norm and that you face certain death.
Australia is one of 2 or 3 countries in the world with an all ages, nationally actively enforced bicycle helmet law. In all other parts of the world, with or without proper infrastructure, it is very common for people to ride without helmets (or ride with helmets in the abscence of a law). Actually, even in Australia there exists an exemption. In the Northern Territory people 18 and older are allowed to ride without a helmet on segregated paths and footpaths and there is no evidence that they are worse off.
Part of the problem is that when people are confronted with the idea of wind in their hair, they have a picture in their head of a rider on carbon fiber bike, swerving in and out of traffic and dodging potholes.

That is not the only type of bike riding though. When getting involved in an MHL discussion, picture a person riding on an upright bike, at a speed similar to a runner, along the beach on the esplanade.

2. If we get rid of helmet laws, we might as well get rid of seatbelt laws

This statement seems to imply that anarchy is going to follow if we start repealing laws that are in place to protect us from ourselves. But seatbelt laws are implemented in all countries, while MHL in very few and some countries without helmet laws have fantastic cycling safety stastics.

A few more points to add:

3. Your brain is more important than your hair

While this statement is totally true, it implies other false statements

It's all about helmet hair

This argument seems to imply the objection against helmet laws are only based on people's concern with their hair or similarly unimportant factors. As Alan Todd of Freestyle Cyclist said the reasons why people don’t want to wear a helmet is not important, but the fact remains is that they don’t want to.

Helmet repeal advocates have a variety of reasons for supporting repeal and it is not all in the name of beautiful hair. The biggest concern is that helmet laws leads to a decline in cycling and that the health benefit loss caused by this is much greater than the gains made by the safety offered by helmets. It may sound silly that people in general ride less because of helmet laws, but there is research supporting this. This statement might be disputed, but the point is still that helmet hair is not the main driver for helmet freedom campaigns. For more details, see Appendix A: The real reasons why there is a call to repeal helmet laws.

4. A helmet once saved my life

Helmets does indeed offer some level of protection during a fall or collision under certain conditions. 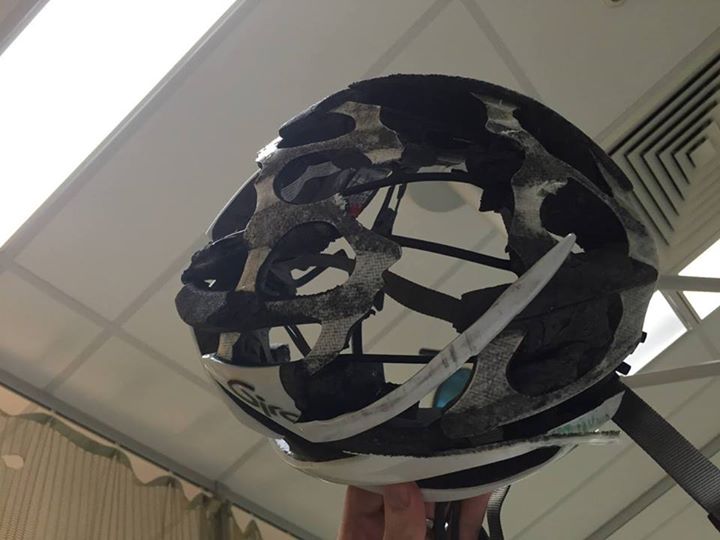 There are some that dispute the level of effectiveness, but more importantly the objection is not to helmet wearing, but the law. People can still wear helmets if they feel it is the safest thing to do under the conditions and changing the law doesn’t mean people should be discouraged from wearing a helmet.

Most helmet freedom advocates recognizes that people cycling at high speeds or less than ideal conditions should wear helmets and they possibly offer some protection when falling. Also note the fact that if your helmet cracked or broke into pieces doesn’t necessarily meant it saved your life. Helmets do their job by absorbing the pressure through the compression of polystyrene. A cracked helmet means the helmet wasn’t able to absorb those forces.

5. If people choose to ride without helmets, they should not have access to Medicare

People participating in a lot more dangerous activities on a daily basis are not denied Medicare. This includes smoking, drinking, not getting any exercise, sport activities and even driving. More people get serious head injuries from driving than people riding bicycles. The medical system simply doesn’t work this way and if it ever did, cycling without a helmet will be very low on a list of ‘dangerous activities’.
An alternative version of this is "your family is going to have to feed you if you become a vegatable". Again, people overestimate the risk, especially when compared to other everyday activities.

Emergency Department personnel will tell you the sight of a person having a serious head injury will have a great effect on anyone. Not only the immediate results of it, but also the long term effects. Someone who has ever witnessed this will be greatly influenced by such an experience. This argument does raise the emotional levels by putting a very emotive image into the discussion, to the point where people can be scared into an position on the matter.

But we have to look at the bigger picture.

We have to put our emotional reactions aside and look at statistics that would support either position for the greater good. Helmet repeal advocates claims the low risk of getting such an injury is outweighed by the disadvantages of the law.In the Netherlands, the SWOV claimed that 5 children and 5 elderly people’s lives would be saved each year if helmet laws was brought into effect for those groups, but the Minister still rejected the request to introduce the law.

The introduction of Australian helmet laws were strongly supported by the Royal Australian College of Surgeons. They and other doctors and emergency department personnel are quick to point out the possible protection a helmet can offer to an individual. Certainly doctor’s voices does carry some weight, but there are professionals more equipped to deal with science of the issue, called Health Experts. Health Experts would look at the broader implications of the law on society and not just the possible effect of an individual in the event of a fall.

Note that there are Health Experts for and against MHL.

7. What about the children?

Not a fallacy, but an argument that is used to greatly influence opinion by eliciting an emotional reaction, similarly to the previous argument. Again it is important to approach the subject scientifically, not emotionally.

Granted, there are statistics supporting the fact that children are more prone to cycling-related head injuries than adults. It is possible that most Australian helmet freedom advocates supports only partial repealing of the law (for people over a certain age) to avoid the emotional component childrens’ safety brings into the debate.

Not hard at all, but again this is not about helmet wearing of a single individual, but instead about the side effects of the law on society as a whole, including that people are put off by riding a bicycle (for whatever reason) when being forced to put on a helmet. When riding a bike is a planned activity, for example going out on a fitness, recreational ride or a long, daily commute with a shower afterwards, part of that planning would be making sure you have a towel and a helmet. But when someone wants to quickly ride down to the shops, it is more spontaneous and helmet laws takes away that spontaneity.

A more clear example of this is the bikeshare schemes. Most bikeshare schemes around the world does very well, but Melbourne and Brisbane bikeshare schemes are struggling compared to cities that doesn’t have MHL. In Melbourne there was initially no option other than using your own helmet. Later on you were able to buy a helmet for $5 and most recently complimentary helmets are made available. The latter option was somewhat successful, but it still has issues including people worried about the cleanness of helmets.

If you use a bikeshare system overseas, you simply swipe your credit card and jump on the bike. 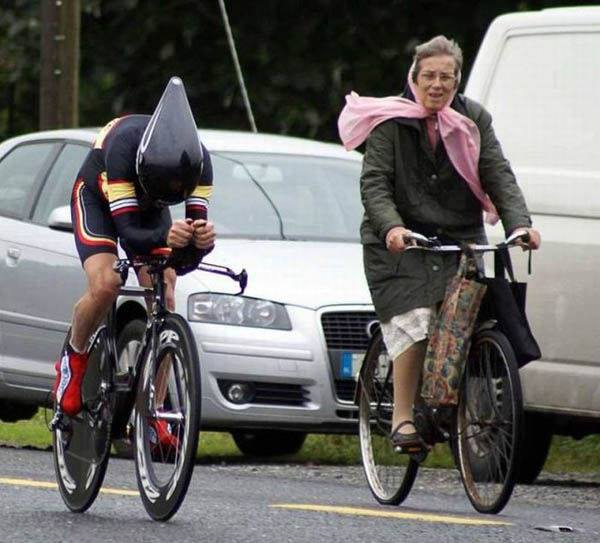 Once again true, but a generalization. Cyclist ride at a great variety of speed, sometimes as slow as someone running. In Australia, cycling is usually associated with fast group rides on weekend mornings, or assertive commuters dodging in and out of traffic while riding 15+ km to work. Some say that this association we have can partially be blamed by helmet laws and that also that this style of riding became more dominant because of helmet laws.

Back to the issue of speed - as mentioned before, most helmet freedom campaigners would argue these riders riding under these conditions are best of wearing helmets and most of them will say that they will continue to wear helmets in the absence of a law.

There are however other groups of riders as well, mums and dads riding in the park, upright cyclist going for a stroll on the esplanade or ordinary people running down the shop in a pair of jeans. These people don’t ride at fast speeds and are a lot less likely to come an incident on a bicycle. One can say ‘you can never be safe enough’, but if we apply the same thinking in all other aspects of our lives, we would be wearing helmets for most of our daily activities.

To get an idea of a riding culture without helmet looks, have a look at this Dutch video: https://www.youtube.com/watch?v=Hb0QjASuuqI

10. We have to get the infrastructure right first

This argument has been going around for a long time. Our infrastructure is continually improving and there are a lot of places where it is safe to ride without the presence of motorised vehicles. What will the reaction be if people start riding without helmets on busy streets? "Look how dangerous! We need more bikelanes!"
Helmet laws should not be a substitute for better infrastructure and this statement gives the impression that helmet laws does offer an amount of protection in the same order of magnitute, which is not the case.

There are a lot of countries that are, like Australia, improving their infrastructure, but doesn’t have helmet laws. This includes the USA, who’s bikeshare program (where people are unlikely to wear helmets) had zero fatalities after 23 million trips.

Appendix A: The real reasons why there is a call to repeal helmet laws

Here is just a sample of reasons given why bicycle helmet laws should be repealed.