Steve 'Mav' Mavrigiannakis is running as an independant for a senate seat in Tasmania in the upcoming federal election.

He says he is pro- the little guy, but he is really just a nutter. He runs on #FakeNews social media memes and scare tactics, sadly we have seen people win seats and even entire elections through scare tactics.

He is not a huge bother, but he is an interesting case study of how the system we have in electing our officials can be used to attack a simple and effective form of transport. Steve Mav hates bike riders, and our guest writer managed to get up close and personal to see how much this nutter sees bike riders as a thing on the road to be ignored, even attacked. He has a belief they don't belong, and a stupid belief that bike riders can't be car owners. Is he out of touch? You tell us.

Enjoy our synopsis from our guest writer. 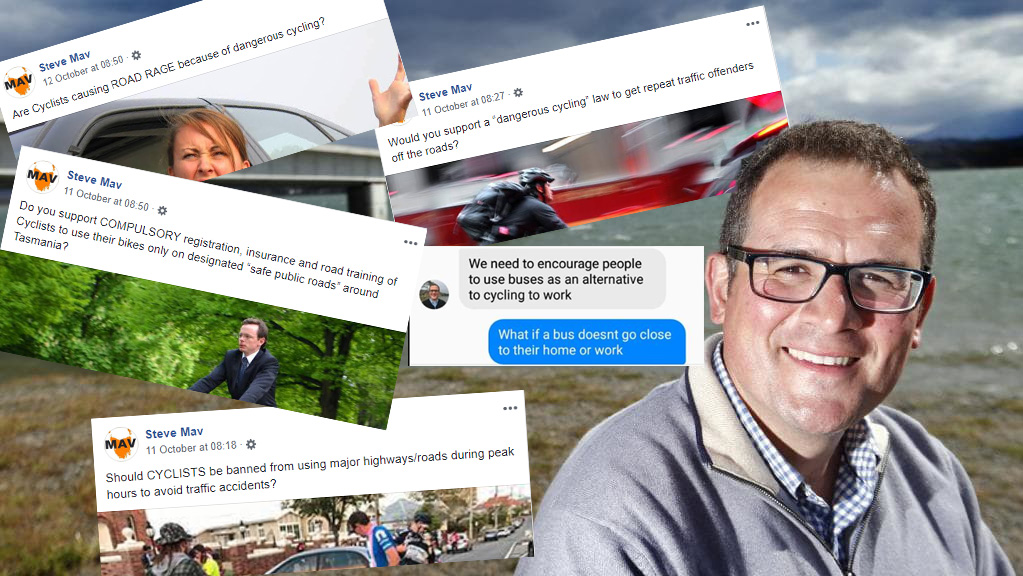 Steve Mav claims that he is standing up for average Tasmanians. After a discussion with him via Facebook messenger, I quickly realised that the only agenda is pushing his personal ideas and opinions.

Steve Mav is very quick to delete and block anyone opposing his political views. So when he added me as a friend (by accident) I saw the opportunity to have a discussion with him. Through our discussion I learnt what Steve Mav actually stands for and it's not pretty:

‘Climate Change has been hijacked by so called scientists who are pursuing a political agenda. Their credibility is compromised when they produce data that is manipulated to reach certain “conclusions”.’

Armed with some scientific research I hoped that I could show Steve how cycling was great for the environment, health and economy. When I asked him for some research to back his opinions he told me that he wasn't speaking at a conference so he didn’t need to and his campaign was based on ‘beliefs and values’.

As his campaign is based on ‘beliefs and values’ and sticking up for average Australians I thought that I could appeal to him with a scenario about an average bloke riding his bike to work, I asked him the following question ‘Do you value the guy riding to work to support his family right to be safe on our roads?' His response left me gobsmacked ‘I value the guy using a car or motorbike or a bus to get to work not a bike’

‘Do you value the guy riding to work to support his family right to be safe on our roads?' His response left me gobsmacked ‘I value the guy using a car or motorbike or a bus to get to work not a bike’

Steve went on to tell me how they should catch a bus to work instead. From this statement, I was pretty confident that Steve hadn’t caught a bus any time recently.

In a last-ditch attempt to try to get him to open his mind to a new Idea I posted this suggestion:

‘I would ask you, when you see people on a bike, ask them about why they are riding. Not just the people in lycra but all sorts. Their reasons and stories may give you some insight. It may not change your view but if you get into the Senate you will be representing them too. They aren't cyclists they are people.’ His response left me feeling pretty sad about the state of our political system and us as a group of people ‘So are green voters but I will not be representing them in Canberra’

As a democratic society, we all have the right to run for elected office and to vote. However, a vote for Steve Mav is a vote for someone who isn’t willing to open their mind to ideas they may not like, use evidence to make decisions that will impact a whole state or represent everyone in his electorate should he be successful.