Sydney’s WestConnex project, now being dubbed#WasteConnex,is looking more like the disastrous MelbourneEast-West Link which saw the Victorian government lose its seat after just one term.

Documents released in Victoria this week showed the East-West Link would have delivered just 45 cents in economic benefit for every dollar invested in construction.[1]

There is no assurance from the NSW Government that the WestConnex project will be any better. With the NSW state elections coming up in March 2015, voters are still unsure of where WestConnex will go, what impacts it will have on their neighbourhoods, and how much it will cost.

Yesterday the NSW Auditor-General condemned the management of WestConnex for failing to follow best practice guidelines, despite being established to oversee the largest motorway project in Australia’s history. The Auditor-General highlighted that only one of five independent gateway reviews had been held.[2] That single review “found that the preliminary business case was deficient and fell well short of the standard required.”[3]

On 1 December the WestConnex route was substantially amended to add another kilometre of tunnelling and undisclosed billions of dollars to the cost. The proposed “northern extension” will take the route further to the north, into Rozelle and Balmain, and add a western harbour tunnel.

A few days after that announcement, the construction contract for 7.5 kilometres of Stage 1 (M4 widening from Parramatta to Homebush) was signed, ready to start construction in early 2015.[4]

“There is very little public information about the project, and what is published is deeply disturbing,” a spokesperson for the Cycling Coalition of Australia said.

“A report released by WestConnex in August predicted that, over the next 25 years, the number of daily cycling trips will increase by just 23 per cent.[5] But the state government has committed to doubling the participation in cycling within five years, and that target was reached in the inner city in just three years. The WestConnex Delivery Authority is simply cooking up numbers to make their case. Australia reached peak car use in 2004 – statistics show that we are driving less every day, not more.”

“All colours of the political spectrum are alarmed by the WestConnex project,” says the Cycling Coalition of Australia. “From Lucy Turnbull who is chair of the Committee for Sydney, to Independent Lord Mayor Clover Moore[6], and former liberal premier Nick Greiner. They are all saying that WestConnex is a disaster for NSW. We’re spending untold billions of dollars on yet another toll road that people don’t want to pay for.”

The former chair of Infrastructure NSW, Nick Greiner, who considers himself "one of the parents of WestConnex", has admitted he is deeply disappointed that the delivery of the motorway has been severed from the original purpose of improving Parramatta Road.

"Urban renewal and infrastructure need to be intimately connected, otherwise you are losing a substantial part of the purpose of the exercise," he said to a forum last week.[7]

A typical cross section of the tunnel shows three lanes of traffic each way, with Parramatta Road looking exactly like it does now.

“Despite the rhetoric, the plans still don’t show wider footpaths for pedestrians, cycleways for bicycle riders, and dedicated bus lanes. It was meant to revitalise the local communities along Parramatta Road, and make Sydney a better place to live, but it has no mechanism to deliver on this promise,” the Cycling Coalition concluded. 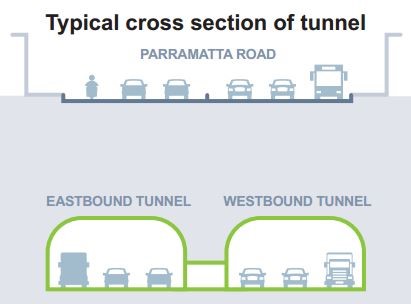 The NSW Government has committed $1.8 billion to the WestConnex tollway project, with a further $1.5 billion grant from the Australian Government.

“The rest of the project will initially be funded through the sale of state electricity assets, and a massive loan from the Australian Government. But eventually the loans will have to be paid for through tolls. The Cross-City Tunnel has gone into receivership twice in ten years, and has just been sold to Transurban for a fraction of its construction cost. It is only taking half the number of cars it was designed for. WestConnex is headed the same way.”

The Cycling Coalition of Australia pointed out that, as part of the $1.5 billion grant from the federal government, the NSW government could include a separated cycle path as part of the grant funding. Instead the Westconnex Delivery Authority has said that bicycles can ride on the shoulder of the motorway.[8] NSW is the only state where this practice is legal.

The Cycling Coalition of Australia will be requesting that the state government: